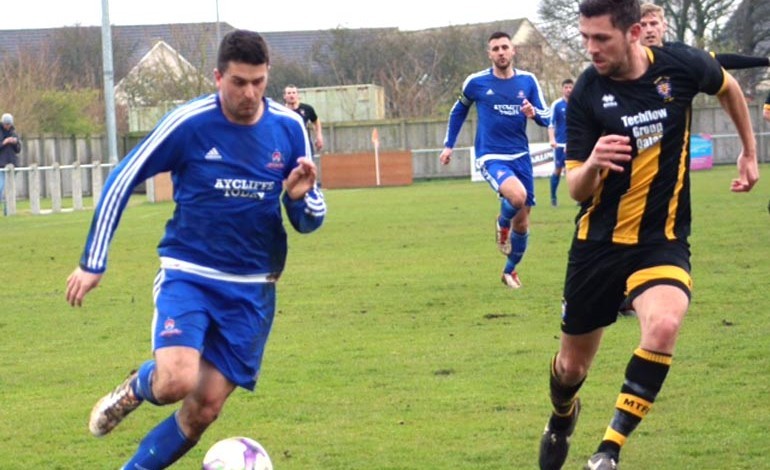 Three goals in four minutes just before half time paved the way for a comfortable victory for Newton Aycliffe over Wembley-bound Morpeth Town on Saturday.

The win took Aycliffe to 54 points from 31 games in the Ebac Northern League Division One where they now lie seventh in the table.

Morpeth’s cup exploits have left them with a daunting fixture schedule but despite that they remain contenders for the League title.

However, they have little room for error if they are to finish top.

Aycliffe manager, Peter Dixon, made changes to his side as his injury list continues to grow.

Andrew Green came in at left back but was himself injured within the first 30 minutes. This forced a reshuffle which saw Dan Mitton move over to full back and sub Thomas Marshall slot into the centre of the defence.

The first half saw good attacking football from both sides. The first chance came after six minutes when a Matty Moffat shot was blocked by Morpeth keeper Karl Dryden’s legs.

Aycliffe took the lead on 38 minutes. An interception by Aaron Brown was played to John Campbell whose run down the right led to a cross into the box. Matty Moffat met the cross and flicked it past Dryden into the net.

Within two minutes Campbell was on the run again, this time firing off a shot himself. Dryden blocked the shot but the ball fell to Dennis Knight who was following in & scored from close range.

The third goal came after another two minutes. A long ball forward gave Campbell the opportunity to beat the defence running through and firing past the keeper.

Morpeth sought to recover in the second half and for a time had the Aycliffe defence under severe pressure. It took two good saves from Winter to keep Keith Graydon off the scoresheet, tipping the first onto the crossbar.

However, it wasn’t long before Campbell was back in action, taking advantage of a miss-kick by the keeper to win the ball and return it past Dryden into the net.

Campbell completed his hat-trick just before the final whistle having been involved in all five goals.

The result was perhaps a welcome surprise for the Aycliffe fans but a just reward for the team’s hard work.