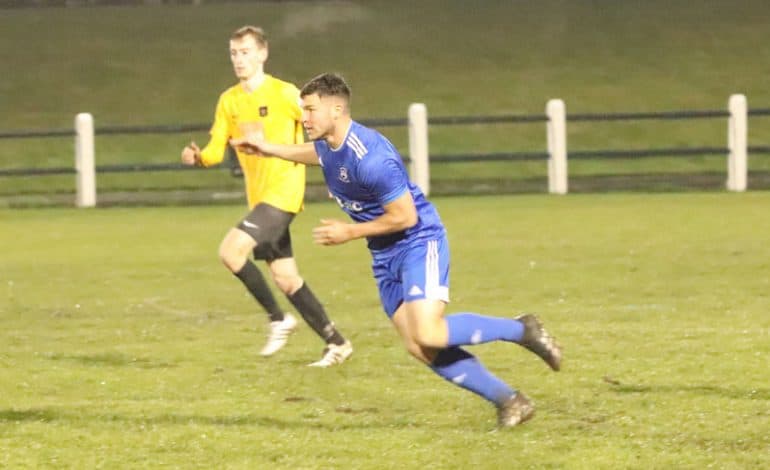 After two wins Aycliffe travelled to Crook hoping to add another three points to their tally.

But they lost out to the odd goal in five, all scored in the second half.

It was a game played in atrocious conditions and it wasn’t surprising that both sides struggled in the first half.

Unfortunately the only incident worthy of note was an injury to Joe Ferguson which saw him substituted just before half-time.

The home side began the second half in determined fashion and within two minutes had the ball in the net with a fine strike from the edge of the box beating Adam Pickford.

Aycliffe bounced straight back and equalised on 51 minutes. A scramble in the box resulted in Marc Costello forcing the ball over the line.

The drama continued and just a minute later Crook restored the lead beating the keeper from a tight angle.

With 20 minutes left Crook extended the lead with a tap in.

Aycliffe brought on new signing James Beauchamp who promptly set what is probably a club record for the fastest booking after the referee ruled that he hadn’t been given permission to come on. Beauchamp made amends, however, five minutes from time when he was able to head a cross beyond the Crook keeper.

Aycliffe pressed for the equaliser but it wasn’t to be, and the home side held on for the points.

The result leaves Aycliffe fourth in the league with 40 points, having played 22 games.

Next match is Tuesday (December 14) at home to Esh Winning in the Durham Challenge Cup.

That game is followed by the visit of Sunderland Ryhope CW to the Beaumont Landscapes Stadium on Saturday (December 18, 3pm ko) in what will be Aycliffe’s last game of 2021.