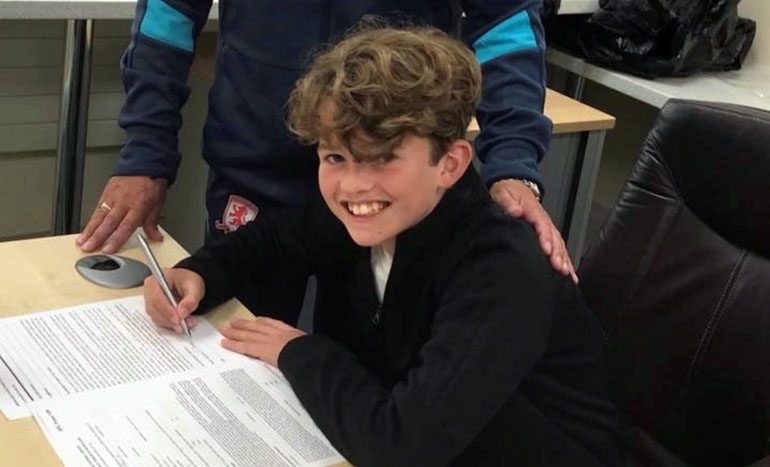 Newton Aycliffe Junior Football Club have revealed one of their star players, Charlie Dawson, has agreed to sign for Middlesbrough FC’s Academy team for the next two seasons.

Charlie’s abilities have been monitored by Boro in their development sessions from a young age and after starting the Under-13s season in fine form he was invited on an eight-week trial.

Charlie, who attends Woodham Academy, has been the lynchpin of the successful Aycliffe Juniors team from the age of four.

He has led this side to first division titles in the TJFA league from Under 7’s through to Under 10’s.

This is along with many other cup and tournament wins. In this time he has made more than 120 league and cup appearances scoring more than 100 goals.

As an Under 11, whilst he attended Byerley Park Primary School, Charlie was a key member of the Darlington and District schools team who won the County Cup and progressed to the national finals. He has also shown great form when playing friendlies for Aycliffe Juniors in Barcelona, Madrid and Milan.

Charlie’s development at Aycliffe Juniors has been supported by his dad, Adrian, who has managed this side but will now step down from his role to support Charlie.

“We congratulate Charlie and wish him all the best as well as thanking Adrian for all his hard work supporting the junior team,” said a spokesman for Aycliffe Juniors.

“His management success is evident in the fact that there have now been four players from his team signed by academy sides in the last two years with many others invited to development sessions and trials.”

Vicki Aspinall, Newton Aycliffe Junior Football Club secretary, added: “Charlie has been a superb player for us from a very young age. It is great to see his superb talent recognised by MFC and we all wish him well.

“It is, of course, sad to see Adrian step down as manager and all involved are extremely grateful for his hard work with the team.”