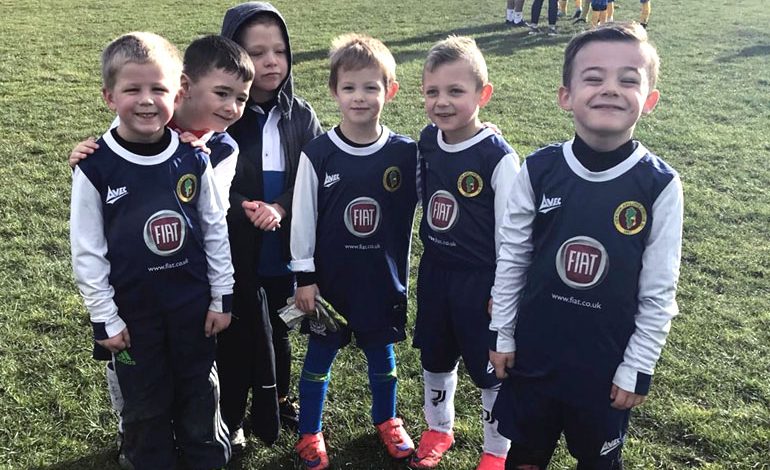 The football season continued for many of the Aycliffe Juniors teams who enjoyed games over the weekend.

The Under 6’s continued their development in preparation for joining the league next season. This week they played in joint training sessions with three teams from Hetton and really enjoyed the opportunity.

The Under 7’s Juniors also enjoyed a friendly game against Tekkers Yellows. They played three twenty minute games winning two and losing one. Scorers on the day were Jonah (2), Marley (2) with Kai and Alfie also getting one each.

The Under 8’s put in a brilliant performance away at Leven. A hatrick from Harry and two goals from Evan secured a 5-2 win. In the development game Evan scored again and Layton grabbed two goals in a 3-3 draw.

The Under 9’s travelled to play Wynyard, a team who had already beaten them this year in both league and cup. A tough day was expected but a spirited effort and some great defensive work from George and man of the match Jamie restricted the hosts. Unfortunately one break away goal was conceded and the game was narrowly lost by a goal to nil. In the development game Finley and man of the match Joe scored with this one ending in a 4-2 defeat.

The Under 10’s Claret played at Woodham against high flying Stockton Hardwick. An exciting first half ended goalless with Aycliffe having the two best chances to score. Stockton scored early after the break but Kai’s goal cancelled this out. The game looked like ending in a draw but the visitors headed in from a corner to pinch a 2-1 win. Ashton was named as the man of the match.

The Under 11’s White played away at Redcar and it turned out to be a disappointing performance. The game was lost 4-0 with James Chadwick named as man of the match.

The Under 12’s travelled to Bedale and a bright start was rewarded when Thomas broke down the right and set up Zak to score. The lead was doubled with a great solo effort from Charlie which sealed a 2-0 win. Alfie’s hard work earnt him the man of the match award.

The Under 14’s played their Challenge Cup quarter final against TIBS Yellow who play three leagues higher than the Aycliffe team. A determined first half effort kept the half time score at 1-0. TIBS though went on to dominate the second half and win 4-0. An assured performance from Georgie Johnson saw him named as the man of the match.