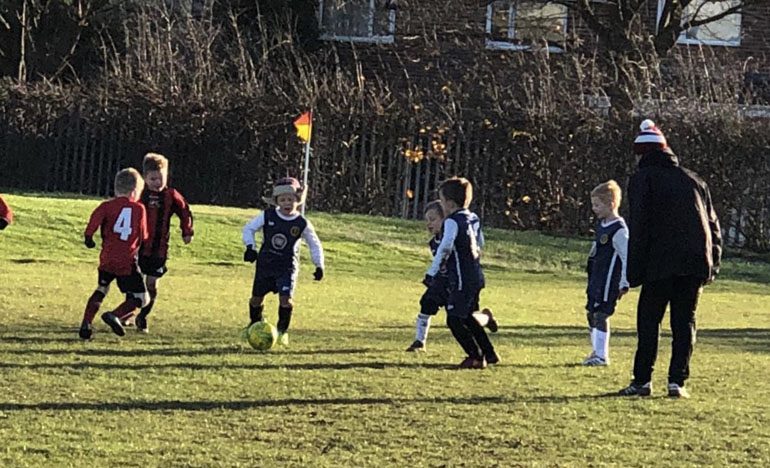 The Aycliffe Juniors footballing exploits continued with the penultimate round of games before the Christmas break. There were some great performances but not all got the result they deserved.

The Under 6’s played a friendly against Swalwell Juniors on Saturday. It was a great game that Aycliffe won 5-3. William (2), Finley (2) and Reagan were the scorers and all the players contributed well.

The Under 7 Whites bagged nine goals to beat Hartlepool in their Russell Foster League game. Man of the match Jack C scored 4, Jack R got a hatrick and Ryan Lee a brace.

The Under 7’s Juniors played an away friendly against Boro Rangers Madrid. A goal from Daniel and man of the match performance from Jack C could not stop the excellent hosts winning the game comfortably.

The Under 8’s played Hartlepool Youth and an exciting game ended in a two all draw. Man of the match Alex and Harry Dunn scored the goals.

The Under 9’s suffered a 1-0 home defeat against Darlington Spraire Lads. The boys played really well and deserved something from the game but it wasn’t to be. Preston was named as man of the match. The development game ended in the same score and Zeke was the man of the match.

The Under 10’s White played away at Darlington All Stars. An own goal put the Aycliffe team in the lead but by half time they were behind after conceding three goals. Two goals from Jayden got the game level but in the final minute a scrambled goal gave the Darlington team a 4-3 win.

The Under 10’s Claret played at home against Primrose Hill they started well but conceded the first goal. The Aycliffe lads kept their cool and continued to play good football. This was rewarded with goals from Ashton, Kai and Danny (2) with an own goal completing the scoring in a 5-1 win. The man of the match was awarded to both Josh T and Harry with each player being a contender for this today.

The Under 11’s Black played at home against Leven AFC Whites. A tight first half ended with the visitors scoring to take a 1-0 lead. In the second half Jack Gibson made some great saves and Rhys scored to draw level. The whole team were named as men of the match as they performed well to finish the game with a draw.

The Under 11’s White hosted Boro Rangers in the quarter final of the League Cup. Niall scored and Harvey was the man of the match but they lost out in the game by five goals to one.

The Under 12’s are really grateful to Modern Rugs UK for sponsoring their new away kit. They travelled to play Redcar this weekend and it was a tight first half. Daniel’s goal gave Aycliffe the lead but Redcar then levelled the score. Man of the match Noah made some great saves to keep the score at 1-1. The second half saw Aycliffe introduce Lewis for his debut and they looked much more comfortable with Ellis, Zak and Daniel scoring to win the match 4-1.

The Under 13’s TJFA League team played at Woodham against Whinney Banks who had beaten them 9-0 only a month ago. The lads showed great spirit and matched their opponents in the first half and the score remained 0-0. After the break it was Aycliffe who raised their performance and a great free kick from Zack and neat finish by Robert secured a fine 2-0 win.

The Under 14’s faced the previously unbeaten Seaton United at Woodham. A great effort and a goal from McKenna along with some great defending secured a 1-0 win. Jake Watson was the man of the match.

The Under 17’s travelled to face Redcar Town Royals. The game was tight at 0-0 after seventy minutes. After this things didn’t go to plan and they lost out 3-0.