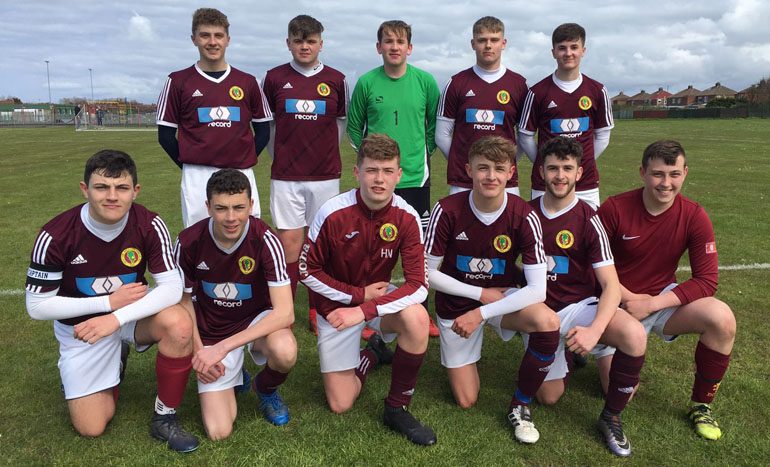 As the football season comes to an end the Aycliffe Juniors teams were busy getting all their remaining fixtures played.

The Under 8’s played their penultimate league game hosting Bishop Auckland Aces. A great performance sealed a 3-2 win. Thomas, Dylan and Oliver scored the goals as they came back from being 2-1 down to win. Stephen was chosen as the man of the match. The teams season finishes at Stockton next weekend.

The Under 9’s concluded their TJFA league season playing away at top of the league Seaton Carew. A tough game ended in a 5-0 loss for Aycliffe.

The Under 9’s Russell Foster League continued with their Spring Cup and the ‘Clarets’ faced Hebburn Town, the ‘Whites’ were up against Washington AFC Lynx. Both teams came away with victories, the Clarets winning 3-1 and the Whites 4-1.

The Under 10’s ‘Black’ played Stockton Rangers in midweek and then Hardwick Youth on Sunday. Against Stockton the league game was lost 5-2 but a great effort in the development game led to a 2-2 draw. At Hardwick they lost out by four goals to one. Their final league match is at Ferryhill next week.

The Under 10’s ‘White’ had a midweek trip to play Norton & Stockton ‘Amber’. Two goals from Niall and one from Archie sealed a 3-1 win, Jayden was the man of the match. The development game was won 6-0 and the goals came from Niall (3), man of the match Will (2) and James. After only earning promotion to Division 1 a year ago this win secured a top four finish in the highest Durham league, a great achievement for the team.

The Under 11’s were at home against Redcar Town. An exciting encounter ended with the them losing by the odd goal in nine. The Aycliffe goals came from Zak (2), Charlie E and Jake. They now have two more games to fit in to the coming week against Great Ayton and Normanby.

The Under 12’s Russell Foster League team played Birtley Town and ended up on the wrong end of a 2-1 scoreline. The Under 12’s TJFA League team had no fixture this week and will now play their final two games, both against Whinney Banks, needing at least one victory to secure fourth place in Division One.

The Under 13’s finished their league programme this week facing Leven on Thursday and Sedgefield on Sunday. First up against Leven they won 2-1 to take their recent record to 5 wins in the last 6 games. Then against Sedgefield their winning run was extended further with a 6-1 win. This team have put in a great effort to end the season well and are now likely to finish third in the league.

The Under 16’s hosted Yarm Juniors on Tuesday and then travelled to Redcar Town Royals on Sunday. Against Yarm they extended their winning league run to five games with a 4-0 win. At Redcar they kept the positive results coming with a 4-1 win. They will now look to keep this great run going for their final two games of the season.

The Under 23’s played at Chester le Street Town and they were 2-0 down at half time but second half goals from Howe, Allenby and Taylor led to a 3-2 win. Jack Slatcher was chosen by the referee as the man of the match. The team now wait until the 20th May for their final league game at Ponteland.