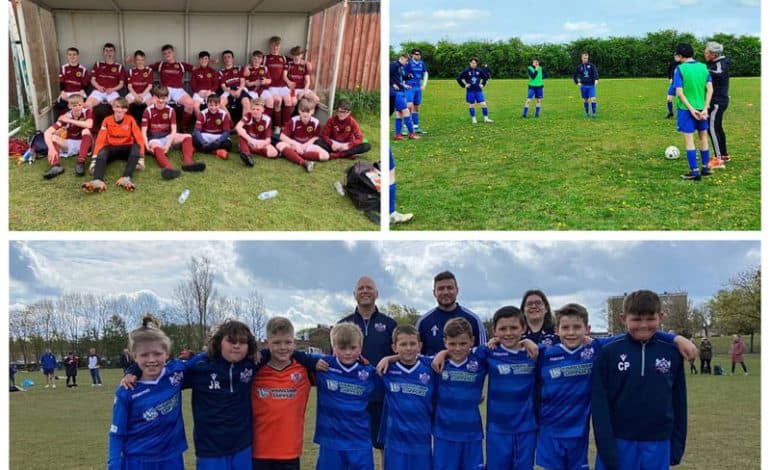 U8’s whites took on Hebburn Town on Saturday in awful conditions and were outstanding in the first half. They did everything but find the back of the net, Josh and Oscar hitting the woodwork several times. Second half didn’t go their way, the highlight being Oscar nearly scoring a worldy from half way. MOTM went to William. Well played by all despite a frustrating result.

U8’s TJFA travelled to Leven Juniors with a much improved performance from the reverse fixture 2 weeks ago. They didn’t get the result they wanted but a great goal from Fin put a smile on the lad’s faces. MOTM Findlay for a great defensive display.

Our U9 blacks played Hetton Juve on Saturday in horrendous conditions. They never gave up and played some great football. With conditions starting to tell, it was not going to be their day. An amazing effort leaving the coaches extremely proud. MOTM went to Charlie John for never giving up and showing great all round improvement. A special mention to the whole team for their perseverance.

The U9 Juniors played host to Guisborough this week, in what was a really tight game. Jack scoring just on half time for Aycliffe. The away keeper was in inspired form and a world class save at the end prevented a draw. MOTM Mason, a mature, solid display.

U11s played hosts to Riverside Juniors in a thrilling match which saw lots of goals and exciting end to end football. A fantastic second half saw Callum grab a brilliant hat trick from the bench. MOTM awarded to Theo.

U12 blacks travelled to top of the league Headworth and were unlucky to be on the wrong end of a 3-1 scoreline. Despite the result, it was a fantastic performance with Aycliffe outplaying the league leaders for most of the game. Some great feedback after the game from the hosts leaving the coaches and parents really proud of the team.

U12 whites were at home hosting a very good Leven side who unfortunately ran out 8-3 winners. Aycliffe did score 3 great goals, with Jack scoring 1 and Jake grabbing 2. Ellis worked tirelessly in defence and was rewarded with the man of the match.

U13s whites made the short trip to Darlington to play Spraire lads on Sunday in a local derby. Aycliffe were simply outstanding all game, and the football was fantastic, running out 4-2 winners. Goals coming from Mason x2, Jayden and Niall. MOTM was awarded to Harvey.

U14s travelled to top of the table Darlo RA in what promised to be an enthralling encounter. An awesome 3-0 win for the juniors with a goal from Josh followed by two from Tom A maintained their 100% start to the season closing the gap to 3 points on the leaders with games in hand.

U16s played host to Cargo Fleet on Sunday at Woodham. A real team display, playing some great football, running out 4-2 winners. A Hat trick from Brennan F and 1 from Jack C.