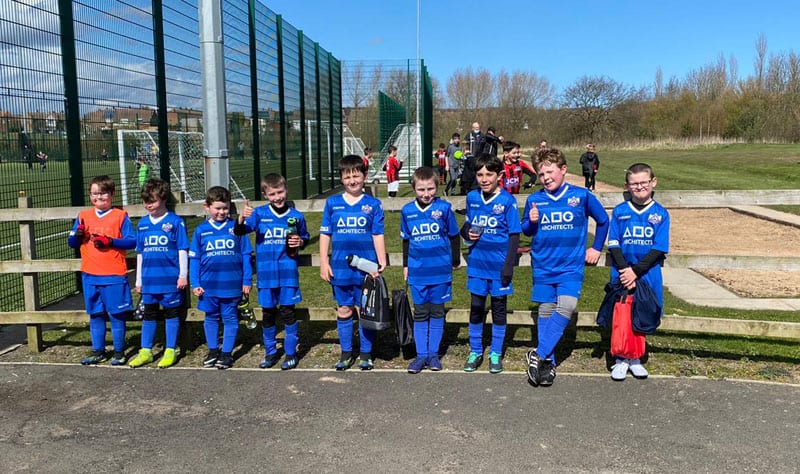 Aycliffe U8 Whites played against Silksworth and Hall. A frustrating game for Aycliffe who scored early on then Silksworth responded with a goal followed by another for Aycliffe but Silksworth responded again to equalise just before half time. Aycliffe started strong in the second half but there were three daft mistakes around their goal mouth for which they were punished. A good end to end match though and it was good to see Aycliffe passing the ball around. Goals from William and Oscar, MOTM went to William.

Aycliffe U8 Blacks began their Spring league campaign away to a very good Leven Juniors side. After a tight first 10 minutes Leven broke the deadlock with a lovely flowing move. Leven’s passing game was too much for Aycliffe and goals flowed quickly. A spirited second half performance saw Aycliffe play themselves more into the game but could not find a goal. MOTM went to goalkeeper Finley who was outstanding in goal.

Aycliffe U9 Juniors started their mini league season away to Bishop St Mary’s Aces. A brilliant evenly matched game throughout with both teams creating chances and defending really well resulting in an even par first half. Bishop came out quicker in the second half but Aycliffe dug in and some great attacking play saw Jack scoring. Bishop never gave up and managed to pull one back. Unfortunately Aycliffe could not hold on and a lapse in concentration saw Bishop score another. MOTM went to Marley for his calm composed display in defence.

Aycliffe U9 Blacks were against Chester le Street Wolves. Alfie hit a great goal from a distance in the first half and that helped Aycliffe take control of the game. 2nd half started well and Rhys scored another long shot and soon after he added another. It was a great performance all round especially pleasing to keep a clean sheet with 2 stand in goalkeepers and a strong defensive display. MOTM was awarded to Alfie.

Aycliffe U11s played against Saxons. Aycliffe started the game brightly and when Callum was fouled in the box an early penalty was awarded. It was saved well and Thomas just missed the rebound. Saxons then hit twice on the bounce with a long ball and their striker, who was their best player by far, outpaced our back three and scored two similar goals. Aycliffe then had a ball cleared off the line by a Saxon defender. Oscar was injured at half time but Ethan came on to play at left back. Aycliffe worked hard in the second half and had a few chances near the end with Alex hitting the post and Thomas giving his all to try and get Aycliffe something from the game.

Aycliffe U12 Blacks away to Peterlee. Aycliffe started slow and conceded three goals in the first half. There were some good runs from Aycliffe but Peterlee’s defence was too strong. In the second half Aycliffe came out fighting to get two good goals back with some fancy footwork from Alex. Aycliffe kept up the pressure going forward with numerous shots on target but to no avail. Peterlee returned putting the pressure now on Aycliffe but Harry the keeper was excellent. Final score was 3-2 to Peterlee. MOTM was awarded to Danny and Alex.

Aycliffe U12 Whites picked up their first points of the league season with a dominant performance against Eaglescliffe Elementis Yellows. Dominant throughout, Aycliffe were 1-0 up at half time with a goal from Jack. Second half Aycliffe come out strong with Jack scoring a second. Man of the match Henry then bagged another two. Eaglescliffe hit back with a great strike but this pushed Aycliffe on further with goals from Jake, a third for Jack and one for James rounding off a fantastic performance. 7-1 the final score.

Aycliffe U13s Whites 2-3 Whinny Banks. Despite dominating the first half Aycliffe found themselves 2-0 down. Aycliffe defended well limiting any further opportunities. Aycliffe played some excellent passing football and created some good chances with their keeper pulling off 3 really good saves. The second half started similarly with Aycliffe dominating but Whinney Banks caught Aycliffe on the break to make it 3-0. Aycliffe rallied by hitting the post and their keeper pulling off another good save. Aycliffe were then awarded a penalty which Niall shot into the corner. Aycliffe scored a second from a Brad free kick which hit the bar but Ollie tapped in the rebound. Aycliffe did score another goal from a Tyler cross/Niall header which was ruled out for a free kick in the build-up. MOTM was awarded to Brad.

Aycliffe U16s played Seaton Carew at home. Aycliffe dominated the first half but missed four one on ones. Aycliffe were passing the ball well and went in at half time 3-1 up with two good finishes from Jack C and one from Brennan F. Second half was more of the same with possession being dominated by Aycliffe with Jack C grabbing his third. Tired legs were showing in the last ten minutes and Aycliffe allowed Seaton in for a second goal. Full time was NAFC 4 – 2 Seaton Carew. MOTM went to Jack C.