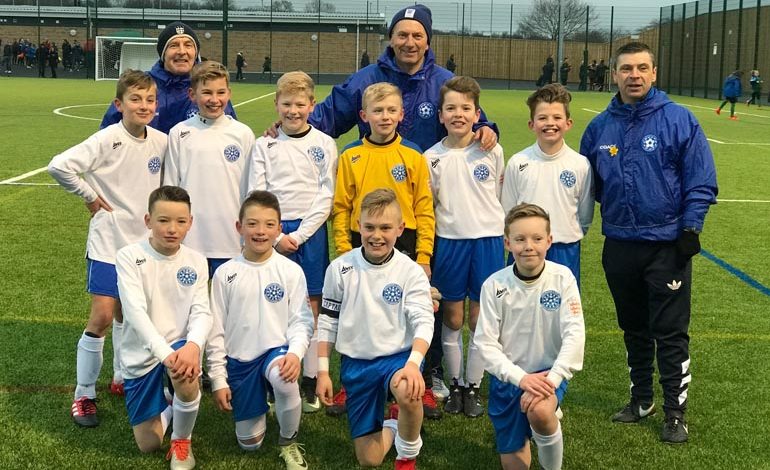 Darlington and District Primary schools football team included five of the Newton Aycliffe Juniors Under 11’s as they travelled to play in the Northern Regional tournament in Sheffield. They were aiming to reach the final to qualify for the national event later in the year.

Aycliffe’s Charlie Dawson, Jake Patterson, Zack Blythe, Jacob Mallinson and Lucas Goddard lined up to face Chester le Street, Chesterfield and Wirral in the group stage. First up was a 1-0 win over Chester le Street, then it was a great display to defeat Chesterfield 5-0 with Lucas, Charlie and Jake amongst the scorers. The final group game saw a draw or win needed against a strong Wirral team and the lads came out 1-0 winners with Lucas on target with the winning goal.

The team moved in to the semi final against Leeds and after going ahead through a Lucas goal Leeds then drew level and the game ended 1-1. The route to the final was ensured with a penalty shoot out win which featured goals from Jacob and Jake. The final saw the Darlington side face Liverpool who had beaten Sunderland 2-0 in their semi final. It was an end to end game and Darlington arguably had the better chances but it ended 0-0. So the regional title was to be decided by penalties and goals from Jake, Jacob and Charlie featured in the shoot out win.

A great tournament win for the team who were playing against the best primary school district teams in the northern region and the Aycliffe club are really proud of their players involvement. The lads all look forward to the National Finals which were staged in Manchester last July with this years venue to be confirmed.