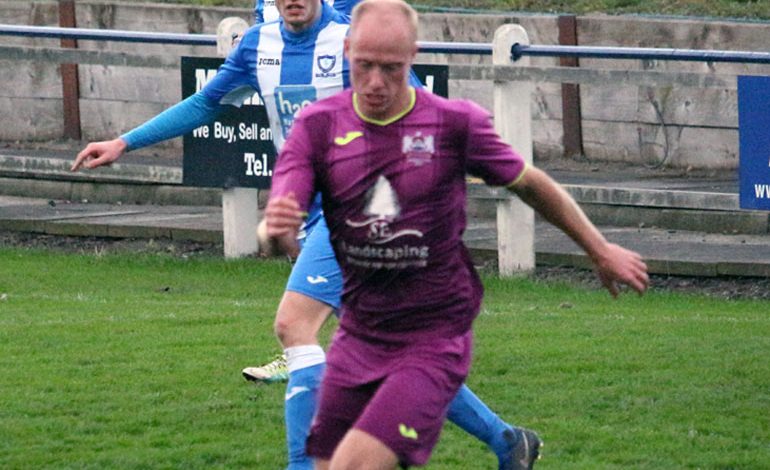 Newton Aycliffe took a point from their trip to the seaside on Saturday.

In a game heavily affected by strong winds Aycliffe battled hard to earn a point despite playing the last 20 minutes with ten men.

The home side had wind advantage in the first half and almost scored direct from a corner after 11 minutes. Fortunately Aycliffe keeper James Winter was able to block & deny the goal.

Aycliffe immediately counter attacked and Marc Costello (pictured above) took a shot from outside the box which was well saved by the Bay keeper. The rebound fell to Kurt Matthews whose shot went wide of the post.

It was Costello’s return to the side after the nasty injury he suffered against Ryhope CW and the midfielder put in an outstanding performance to earn the Man of the Match award.

Winter was called into action after 20 minutes when a defensive mistake forced him to put in a good tackle on a forward.

Whitley Bay took the lead on 24 minutes when a cross from the right was met by Tom Potter whose shot gave Winter no chance.

Aycliffe started the second half strongly with a Banks free-kick on 46 minutes being tipped over the bar by the keeper.

However as the second half progressed Whitley Bay pressed as Aycliffe tired.

There were chances at both ends but Aycliffe suffered a blow on 72 minutes when skipper Aaron Brown was sent off for a ‘last man’ challenge.

From that point it was a case of hanging on for the point which was well deserved.

The result sees Aycliffe drop one place in Division One to 16th with 17 points.

They have two difficult home games this week – at home to Marske United on Halloween while Dunston UTS will be the visitors to Moore Lane Park on Saturday (November 4).