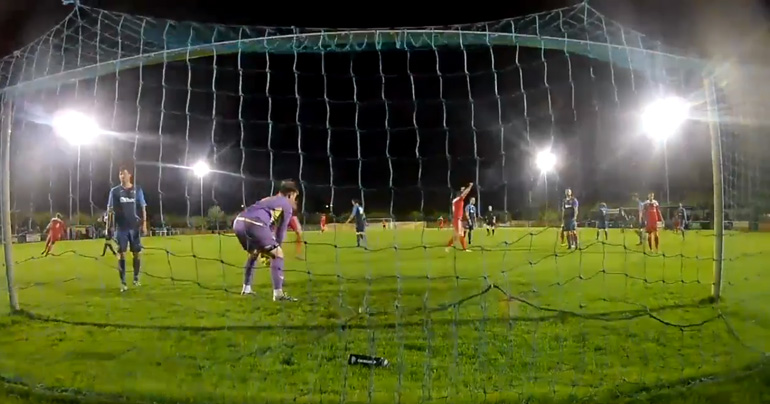 It was a frustrating night for Newton Aycliffe at the First Mortgage Glebe Sports Ground as Brian Atkinson fell to a narrow defeat in his first game in charge of the club.

A scrappy affair was settled in the 11th minute when Declan Bisset’s whipped freekick evaded everyone in the penalty area, including goalkeeper Adam Pickford, for the only goal of the game.

Aycliffe dominated possession for large periods of the game and saw a penalty appeal against the returning Ben Reay waved away in the closing stages.

But the Newtonians were unable to find an equaliser against a resolute Lang Jacks backline including goalkeeper James Anderson who scooped the man of the match award.

Atkinson made three changes to the Aycliffe starting XI who suffered a 1-0 reverse against West Allotment Celtic with Jack Naylor and Lewis Walton returning to the defence in place of Nick Green and Callum Munro who missed out altogether.

Liam Jarvie also missed out in Atkinson’s squad as a returning Reay made his second debut for the club after joining from Crook Town in the week.

Adam Burnicle and Andrei Ardelean led the line for Aycliffe but it was the home side, unbeaten since the arrival of Tony Fawcett, who started brighter with Bisset testing Pickford with an early freekick from the left.

Bisset was almost provider in the ninth minute when his corner from the right was met by Kieran Galbraith with the defender’s header stopped on the line.

But the hosts did take the lead two minutes later after winning a freekick on the left midway inside the Aycliffe half which Bisset curled in and found the corner with nobody in the area from either team able to get a touch on the ball.

The goal sparked Atkinson’s side into life though as Aycliffe began to dominate possession as they pressed for an equaliser.

And Aycliffe saw appeals for a penalty waved away when Anderson clattered into the back of Ardelean when trying to collect a Joe Ferguson freekick only for the referee to award the Lang Jacks stopper the decision.

Anderson sent a long ball forward from the resulting freekick and it bounced between the Aycliffe lines to find Scott Jasper who had a clear run at goal from the right but was denied by a smart save from Pickford.

Ferguson tested Anderson on the half hour mark from range before Marc Costello almost capitalised on a fumble from the Whickham number one but he couldn’t generate enough power in his follow-up.

The lively Reay was next to try his luck when recycling an Aycliffe corner as he stung the palms of Anderson.

Zak Atkinson latched onto a long clearance to flash just wide of Pickford’s post before Burnicle fizzed an effort just wide for the Newtonian’s who trailed at the break.

Ferguson tried his luck from range again early in the second half before Burnicle this time hit the target from inside the area only for Anderson to parry away.

Jake Petitjean called Anderson into action once more just after the hour with a dipping freekick from outside the area as Atkinson’s Aycliffe continued to look the more likely.

Scott Robson brought a good save out of Pickford in a rare second half attack for the Lang Jacks as the game began to open up in the final 20 minutes.

Atkinson flashed wide as the home side threatened on the break before substitute Ben Dibb-Fuller sent his effort narrowly over the bar from the edge of the area.

And then came the moment of controversy in the final stages as Reay latched onto Ferguson’s lofted ball and looked to have gotten the better of Lang Jacks defender Galbraith before going down, but the referee remained unmoved as the home side held on to a record a narrow victory and condemn Atkinson to defeat in his first game in charge.