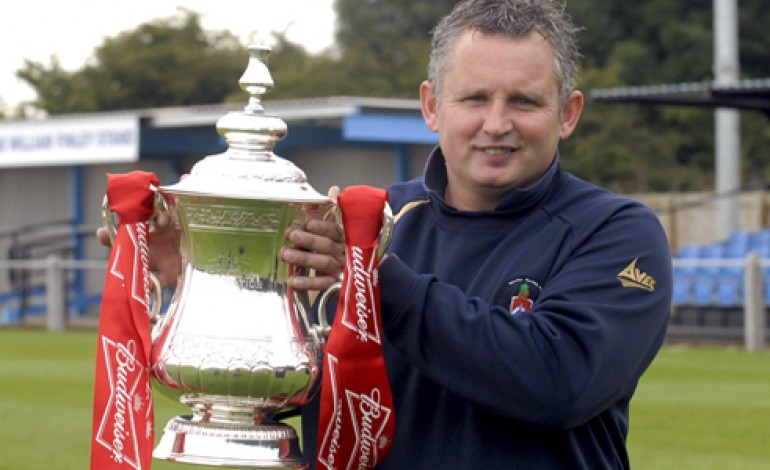 Glen Robertson continues his series of features looking back at some of our famous North-East players. This week, it’s Newtonian Brian Atkinson…

Brian Atkinson is not just well-liked at one North-East club. The former England under-21 international is revered at three of the region’s clubs. He made appearances at Wembley for both Sunderland and Darlington, and also helped take home-town club Newton Aycliffe from playing park football to competing at the top level of the Northern League.

The 41-year-old old – who now coaches youngsters in Aycliffe – started his career at Sunderland, breaking into the first-team as an 18-year-old in 1989, before joining Darlington – via a loan spell at Cumbrian-side Carlisle United – where he stayed until an injury brought a premature end to his playing career.

The midfielder made occasional appearances for Sunderland in the 1989/90 season as Sunderland reached the old Division Two play-off final. Atkinson came on as a second-half substitute at Wembley – his first of three appearances at the iconic stadium – replacing Colin Pascoe with 21-minutes left on the clock, but he was unable to inspire his team to draw level as Swindon Town won 1-0.

But Atkinson and his Sunderland team-mates were still able to take to the field in the 1990/91 Division One season, as Swindon were stripped of their promotion due to financial irregularities. The Black Cats were unable to last more than one season, though, and Atkinson was back in the second division a year later.

It was still a landmark year for Atkinson, as he made his England under-21 debut in December, 1990, as England’s youngsters played out a goalless draw with their Welsh counterparts at Tranmere’s Prenton Park.

Atkinson’s performances were enough to secure a place in the under-21 squad for the 1991 Toulon Tournament. England were defending the trophy and the midfielder appeared in all three games as the Three Lions reached the final once again.

France were the opponents in the final, and Atkinson lined-up alongside players such as Alan Shearer and David James. Shearer struck the only goal of the game, 11-minutes from time, to secure victory for England. Atkinson would make one more appearance for the under-21s as a substitute in a 2-1 defeat to Poland.

In the 91/92 season Sunderland struggled in the first half of the campaign and at Christmas time were facing a second-successive relegation. Manager Denis Smith was sacked and replaced by Malcolm Crosby in December.

Crosby put his faith in Atkinson, turning the midfielder from a bit-part player to a permanent fixture in the Sunderland first team. Not only did Crosby’s side escape relegation, but they shocked the football world by reaching the FA Cup final at Wembley.
Atkinson fulfilled every boys’ childhood dream by playing at Wembley in the FA Cup final, but his spirited Sunderland were unable to cause one of the all-time great shocks against heavyweights Liverpool, who won 2-0. He did get his hands on a winner’s medal, but that was because of a mix-up in the presentations and the shocked Liverpool players soon caught up with Atkinson and his team-mates to arrange a swap.

Atkinson stayed at Sunderland for four more years – making over 150 appearances for the Wearsiders – but eventually found himself out of favour. A short loan spell at Brunton Park for Carlisle United in 1996 didn’t work out, before the Quakers came calling.

Atkinson arrived at Feethams in August 1996 and spent six years at the club. He arrived a couple of months after Darlo had been beaten at Wembley by Plymouth Argyle in the old Division Three play-off final. Four years later, the club were back at the national stadium again.

Quakers were a formidable side at their level in the 1999/2000 season, with Atkinson playing alongside the likes of Andy Collett, Craig Liddle, Martin Gray, Neil Heaney and Marco Gabbiadini, under the guidance of David Hodgson.

They reached the FA Cup third round – due to Manchester United’s withdrawal, Darlo were selected as ‘lucky losers’ – where they put up a valiant fight away at Premier League side Aston Villa, but succumbed 2-1 thanks to a wonder-goal from Benito Carbone.

In the league, the club finished three-points off automatic promotion and found themselves up against fierce rivals Hartlepool in the play-off semi-finals. Atkinson was an unused sub as Quakers won the first-leg 2-0, and came off the bench in the second-leg as Darlo reached Wembley.

Again, Atkinson walked out at Wembley for a cup final but for the third time he ended up on the losing side. Peterborough won 1-0, as Quakers dominated but failed to break through the Posh rearguard.

Atkinson’s career came to an early end due to a cruciate ligament injury. After 226 appearances and 14 goals, he played his last game in 2002. Fittingly, his last ever goal was in a 2-1 victory over Hartlepool. The other Darlo goalscorer that day was current Newton Aycliffe striker Dan Mellanby.

Atkinson would work with Mellanby again, at his home-town club Newton Aycliffe. He started coaching the side alongside Allan Oliver and Gary Farley, and used his coaching skills to help the club leap from the Durham Alliance to the first division of the Northern League in just four seasons.

He now spends his time coaching the next generation of North-East superstars at Martin Gray’s Football Academy, hoping one day that another Newtonian can follow in his footsteps.