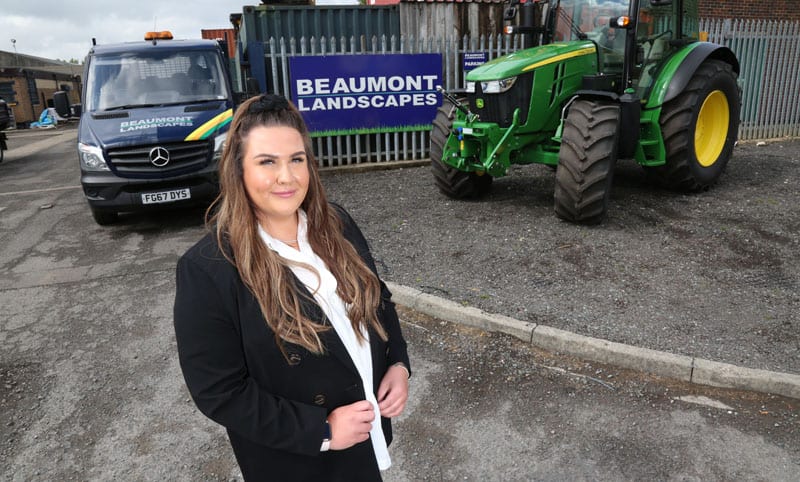 An ambitious business leader is smashing the glass ceiling of the grounds maintenance industry after being appointed to lead a growing firm.

Sophie Lineton has taken over the role of managing director of Newton Aycliffe-based Beaumont Landscapes.

The family-run business has excelled during the pandemic, with sales increasing and staff numbers growing to 20.

Sophie has worked as an account manager for Beaumont over the last seven years and earlier this year was appointed operations director.

But she has taken over the top job from her brother, Alex Lineton, after the business saw a 30% sales increase in the last year.

“I’m excited to take on the responsibility and proud to continue building the family business,” said Darlington-born Sophie, who lives in Aycliffe.

“I’ve had a good solid foundation within the business over the last seven years and I feel I’m ready to take the business on to the next level.

“We’ve enjoyed growth in the last year and I’m ambitious to grow it even further over the next 12 months and coming years.”

It’s now headed up by the third generation of the Lineton family, with Sophie as managing director.

Beaumont now has a growing list of 160 contracted sites across the whole of the North-East, Yorkshire and Cumbria regions.

The company has recently won a number of new high-profile contracts, most notably with PHS Green Leaf and Wynyard Hall.

Now Sophie plans to bring in a new management team, including a contracts manager, foremen and a non-executive board, creating more local jobs.

“The company has a solid base from which to grow after many years establishing a strong reputation,” added Sophie, who has previously worked in finance for Barclaycard, Scottish Widows and the Bank of Ireland.

“What’s most pleasing is the number of jobs we continue to win on our home patch on Aycliffe Business Park. People can see the standard of our work – and word of mouth goes a long way.

“We have a strong business plan geared towards sustainability and future growth, so it’s an exciting time for the company.”