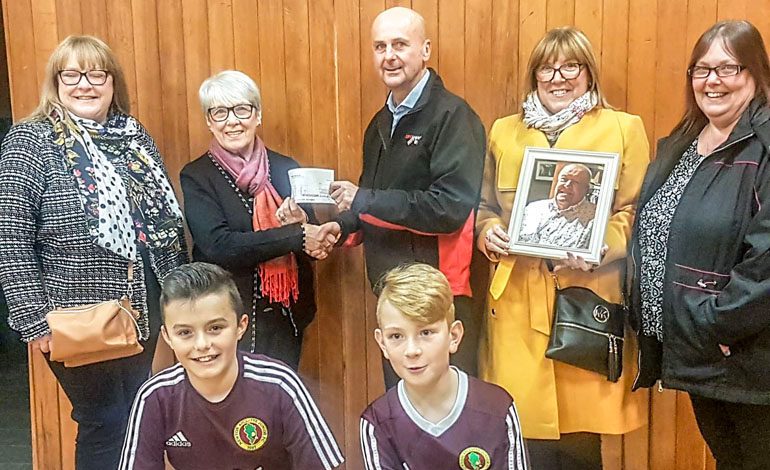 Ronnie Kipling sadly passed away after a battle with cancer in August this year.

Ronnie lived in the Newton Aycliffe most of his life with his wife Mary and had three children; Sharon, Julie and Paula and four grandchildren Amy, Liam, Sean and Thomas.

Even after the boys finished playing for the teams Ronnie would regularly go to watch other Newton Aycliffe junior matches.

The family thought it would be a fitting tribute to donate all money raised at the funeral to NAJFC.

A very generous £530.30 was raised and NAJFC Chairman Nige Slatcher received the cheque from Ronnie’s wife Mary and daughters Sharon, Julie and Paula.

The club have decided with the family’s permission that this money will go towards funding a portable defibrillator which could potentially save the lives of others.

Woodham Academy have kindly allowed the club the use of their own defibrillator which is located inside the school however a portable one would allow managers to have one pitch side.

As some of the pitches are outside the main school grounds having a defibrillator pitch side could significantly increase the chances of recovery. Studies show that every minute without CPR and defibrillation reduces someone’s chance of survival by 10 per cent.

“On behalf of the club we would like to thank the Kipling family for their very kind donation which will be a lasting and very fitting tribute to such a lovely man,” said NAJFC.