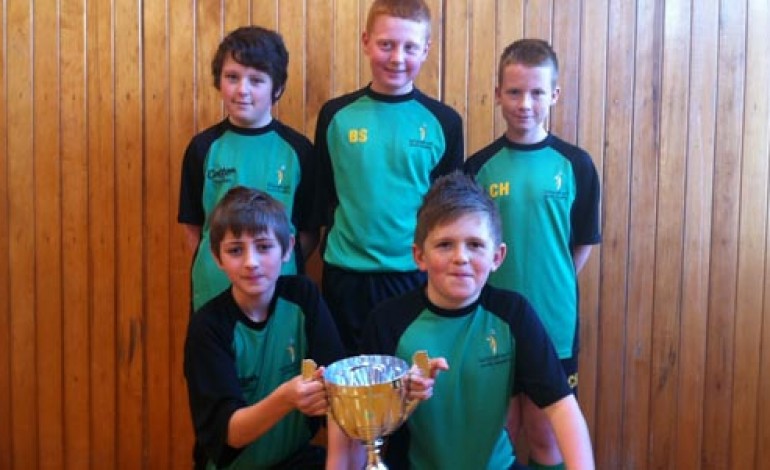 Woodham’s group was a difficult one that included King James, Greenfield, Durham Johnston and Whitworth Park.

With two wins, one draw and a defeat, Woodham qualified finishing second in the group. A difficult semi-final tie lay ahead against Parkside who had won their group comfortably beating St Johns, Ferryhill, Gilesgate and Sedgefield on the way.

The final itself was a very cagey affair with both sides worried about their respective attacking threats, Woodham made changes from the side that beat Parkside with Broden Forster deputising in goal for Robbie Lee.

As the game went on chances started to arise with both Robbie Lee and Joel Gibson forcing fine saves from the Durham Johnston goalkeeper, while at the other end, Broden produced a fantastic triple save that our Sporting Ambassadors Jason Steele and Ross Turnbull would have been proud of.

After five minutes neither side could be separated so two minutes of extra time was required. Extra-time followed the same pattern as normal play with both sides reluctant to fully commit themselves in fear of being undone on the counter attack.

With only one minute left on the clock, a great tackle from Ben Stephenson set Woodham up for one last attack.  After winning the ball, Ben played a lovely pass to Robbie Lee who centred the ball for Jack Barker to strike home left footed into the top corner and put Woodham in the lead.

Some resolute defending and a fine stop from Broden meant Woodham held onto their lead and celebrated at the full time whistle knowing they would be the side going forward into the County Finals representing Bishop Auckland Schools Football Association.

Sports Academy Director Liam Clough said: “This is a fantastic achievement for the lads, especially as our usual goalkeeper dropped out hours before the start.

“Since we have started our football academy delivered by Neil Maddison and Andy Collett of Premier Player I have seen an improvement in performance. I believe the input our students are receiving from top quality UEFA A licenced coaches has helped to develop all aspects of performance.”