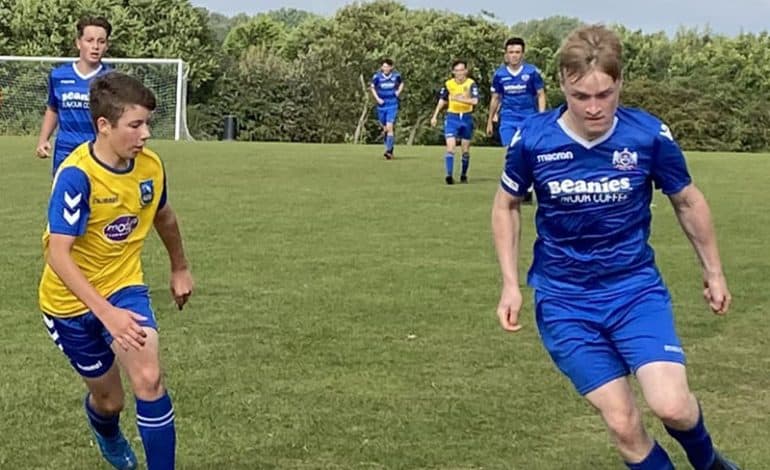 U9’s Whites were unlucky against Farringdon ISL on Saturday. Holding their own for most of the game, just letting in three scrappy goals again towards the end.

U9’s Blacks played away at Hartlepool St Francis Royals. Not our best display, conceding a number of goals before half time, but a much improved 2nd half performance saw Regan grab a consolation for us. MOTM Findlay Ward

U10’s Juniors hosted Cleveland Juniors on Sunday. A great game with both teams playing some good football & creating chances. Aycliffe took the lead in the first half with Ernie unselfishly playing Marley in to score. Second half continued much the same & Aycliffe added another with some great individual skill from Dom. Aycliffe deservedly grabbing the 3 points. MOTM Daniel with another solid display

U10 Whites played away at Silksworth against Whickham Fellside in div 1. Unfortunately it wasn’t Aycliffe’s day with the game starting 20 mins late due to ref sleeping in. Then a mixture of decisions going against us, and some sloppy play from the lads. We couldn’t get any flow in the game and came away on the losing side this game. All Aycliffe goals coming from Jack R and MOTM going to Thomas for an improved strong defensive performance

U10’s Blacks travelled to play Blackhall Monks. We started well against an unbeaten Monks side. Chances were limited due to a very organised defence. It was a stalemate at HT with the Blacks having the best of the chances along with some fine saves from Charlie between the sticks.
The second half was tough for the Blacks and we struggled defensively, unfortunately conceding, allowing Blackhall the spoils on this occasion. MOTM was Oliver, who throughout the game showed strength, skill, and heart. MOTM last week was Harry who worked hard, never gave up and bagged us a goal.

U11’s travelled to FC Hartlepool reds and were tremendous, putting in a dominant performance and running away with the game. Goals scored by Archie x3, Alex x2, Jack x2, Sam & Evan. MOTM was Archie

U12’s were away vs Billingham Lions Sunday morning, a tight first half saw us take the lead after 10 minutes, Lions played well and equalised. An unfortunate own goal from Lions and then keeper error saw Aycliffe go into half 3-1 up. 2nd half saw Callum get his 2nd and his 4th in 3 games. We saw this one out quite comfortably with Logan making an excellent save in the last minute. Final score 4-1 to Aycliffe. MOTM – Jamie

U13’s Blacks hosted Ouston Eagles & from the start dominated the game, with what only be described as Great football. Danny opened the scoring with Jayden providing the assist, then further fantastic football from all the lads resulted in goals from, Danny x4, Alex x3, Jayden x1, and Keaton x1. Ouston did manage to grab 2 goals back, but the big man in goal was outstanding as always. Well done all the lads, a fantastic game ending 9-2 Aycliffe. MOTM Keaton.

U14’s lost 5-0 away to Hartlepool FC. A disappointing result, and we missed some key chances, which could well have altered the outcome of the game. MOTM was Ollie. We go again next week!

U15’s hosted Eaglescliffe Sunday morning with an excellent first half seeing us go in 4-0 at the break with goals from Jordan, Tom, Trav and Ethan. Eaglescliffe pulled one back just after the restart before Trav finished off the scoring with his second of game. Another assured performance by the lads. FT Aycliffe 5 Eaglescliffe 1.