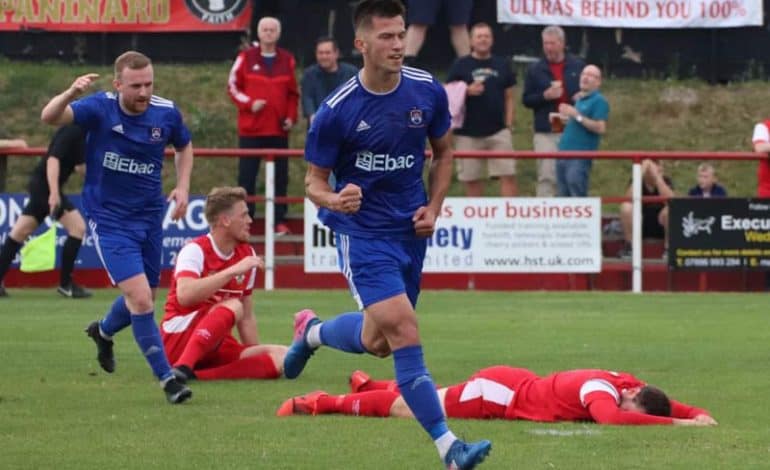 Newton Aycliffe headed home from North Tyneside with all three points from a game where both sides had opportunities to have changed the outcome of the game.

Colin Stromsoy’s side started brightly penning their unbeaten hosts in before they started getting a foothold in the game, firstly appealing loudly for a penalty when a ball into the area struck Aaron Brown on what the home side thought was the arm, then again around the quarter of an hour mark with the free-scoring Dan Wilson almost getting on the end of an inviting ball into the six yard box but failing to connect.

The home side’s pressure paid off after 14 minutes when a quick break down the left side left Cam Cunningham bearing down on goal, Adam Pickford raced him to the ball but it was Cunningham who got there first and he weighted his chip to perfection as it went over the leap of Pickford and nestled in the net.

Aycliffe levelled up the game minutes later when some good work from Naylor and Jarvie in not allowing the home defender to shepherd the ball out for a goal kick saw the latter disposses him and lay it off to Andrei Ardelean whose strike snuck under Marshall in the Shields goal to give him his second goal in two games.

Aycliffe took the lead for the first time moments before the break when the tireless Jarvie once again didn’t give up on a lost cause and snatched the ball from the toes of a Shields defender who took too much time at the edge of the area and, after his initial strike was blocked, had the vision to roll the ball to his left where Ardelean was waiting to pounce and his strike bounced just in front of Marshall who’s hand could only direct the strike into the roof of the net giving the visitors the lead as we went in at the break.

The second half was barely 10 minutes old when Wilson succeeded where he failed in the first half by sliding in at the near post to turn home another low cross into the area to level up the score.

Less than a minute later Aycliffe sent the ball forward and, while making room for himself, Ethan Wood was nudged over and, despite the protests from the home bench, the referee was unwaivered as he pointed to the spot.

The ever dependable Jake Petitjean stepped up and despite the home keeper’s attempts to disrupt his routine Petitjean fired his effort far too well for the keeper to get near to.

North Shields didn’t lie down following falling behind again and despite their possession it took until the 68th minute before the next real chance but unfortunately for the home support it ended with Andrew Cartwright getting his name taken by the referee who saw through his theatrical attempt to win a penalty.

With 10 minutes left Col Stromsoy adjusted the formation by bringing on Aiden McGee to snuff out the high balls into the area and himself and Aaron Brown, who made two fantastic last gasp blocks, stood out among a resolute defensive line.

North Shields pressed until the end, even in the fourth minute of time added on when the referee awarded them a corner from the left and Marshall, the goalkeeper, joined the bodies in the box to try to force home a leveller but Callum Munro, who was a rock at the back, headed clear and that was time up and North Shields unbeaten start to the league season was over as Aycliffe recorded their first league win in 3 games.

Next up Aycliffe visit neighbours West Auckland this Friday night (September 24, 7.30pm). Aycliffe then return to the Beaumont Landscapes Stadium on Saturday, October 2, when Redcar Athletic will be the visitors (kick off 3pm).