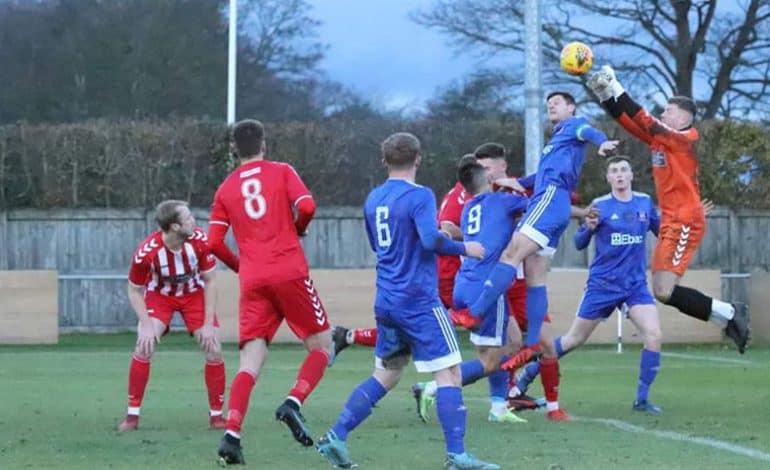 Newton Aycliffe staged an impressive fightback to take the three points at the Beaumont Landscapes Stadium.

Following on from Tuesday night’s emphatic eight goal victory over Whitley Bay, the first half-hour of Saturday’s game was the polar opposite as Aycliffe found themselves 0-2 down with the visitors comfortably in the driving seat.

It took going two down for Aycliffe to get out of the starting blocks and the pressure paid off ten minutes later when a ball into the box was met by a rocket of a header from the skipper Aaron Brown to half the deficit.

On the stroke of half-time it was all square as Ben Dibb-Fuller raced on to a perfect through ball from Jake Petitjean and beat the on-rushing Patton in the visitor’s goal.

With 10 minutes of the second half gone Aycliffe took the lead for the first time in the game as Liam Jarvie beat the last defender and got through one-on-one only for Patton to come rushing out and bring him down as Jarvie pushed the ball around him.

Up stepped Jake Petitjean who made it 9/10 penalties as he blasted his strike past Patton who guessed correctly but couldn’t keep the ball out.

The visitors pressed for the equaliser, even pushing goalkeeper Patton up to be a presence in the Aycliffe box while Seaham had back-to-back corners.

While the visitors pushed it wasn’t all one way traffic and Aycliffe had chances of their own to extend the lead, most notably when man-of-the-match Andrei Ardelean lashed his strike just over the bar as the clock ticked over to 90 minutes.

Jack Clarkson, a product of the Newton Aycliffe FC Junior Section, came on as a substitute for Jarvie to make his debut in the dying minutes becoming the first player to make his debut since the amalgamation, a ground-breaking moment for the club.

The final whistle signalled a second win in a row for manager Brian Atkinson with his side scoring 11 goals in a week.

Ayclliffe make the short trip to visit Crook Town in the Ebac Northern League on Saturday.

The next home game is a Durham Challenge Cup tie against Esh Winning on Tuesday, December 14 (ko 7.45pm) with Sunderland Ryhope CW visiting the Beaumont Landscapes Stadium on Saturday, December 18, for what is scheduled to be Aycliffe’s last game of 2021.