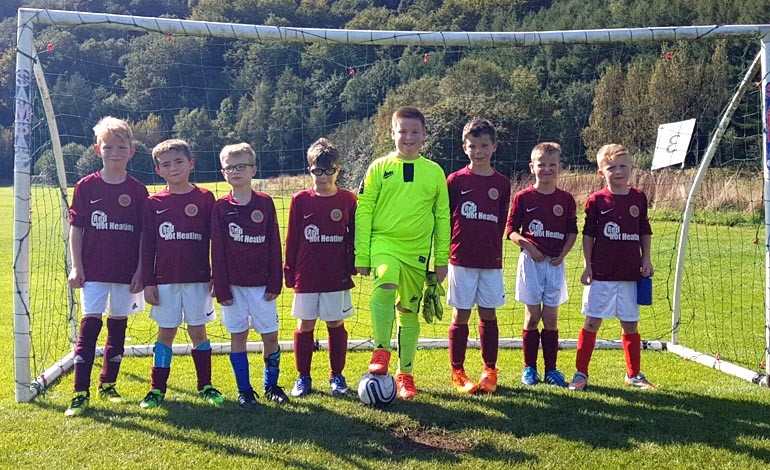 Aycliffe Juniors got in to the second full week of their season with teams in both league and cup action and some teams starting their seasons.

The Under 9 Blacks (pictured) got their season off to a start with their first ever game as a new team for our club.

They faced Birtley Town in the Russell Foster league and Lucas scored when he finished a great cross from Jay. The whole team were great and this included Jake, Jack, Noah, Robbie, Charlie and Sam but their efforts were not enough to prevent a 2-1 defeat. Lucas was named as man of the match.

The Under 10’s played away at Darlington All Stars Jets in the league cup. In the first game there efforts were not enough to progress in the competition. In the friendly game a super free kick from Jake, the mornings man of the match, helped secure a 2-0 win.

The Under 11’s travelled to Hartlepool St Francis also in the TJFA League cup. Lucas got the first 2 goals before the lead was halved, Jake P got the third goal for a 3-1 half time lead. In the second half Lucas completed a hatrick, Jacob scored his own hatrick and Aaron added a stunning goal in an 8-2 win.

The Under 11 Russell Foster league team faced Sunderland Athletic it was an even start and after conceding an early goal Tom won the ball and scored the equaliser. In the second half despite Jake and Taylor linking up well and creating chances goals were conceded at the other end and the match ended in defeat. Man of the Match was Herbie for his efforts in goal.

The Under 12’s faced North Ormesby in the League cup for their first game of the season, the opposition are higher in the league structure so it was to be a good challenge. Aycliffe had all the early chances and Cayless tested the keeper but he was up to the task. The second half started with a 1-0 deficit, after conceding again the Aycliffe goalie was injured and had to be replaced. Cayless moved in to goal and made the saves to keep Aycliffe in the game. Hardy then scored direct from a corner before Clark got the equaliser, great comeback. Despite such a strong effort to get level in the match a goal was conceded and the game ended in a 3-2 loss.

The Under 13’s had a tough cup game at Trimdon United who play in a higher league. Despite starting well they found themselves 3-0 down as the opposition striker was in great form. Dylan H and Zack got goals back before half time as the lads battled hard. The second half was spent on the back foot except for when Curtis finished well from a throw in by man of the match Dylan H. The final score was 8-3 to Trimdon.

The Under 15’s were also in the League cup and came up against Hartlepool Pools Youth at Sunnydale. They went a goal behind before Stoker (2) and Hynes put them in to a 3-1 lead. The same two players scored again with Stoker completing a hatrick as a 5-1 lead was opened up at half time. The score moved to 5-3 before Hynes got his hatrick and the game ended with a 6-4 win for the team to move in to the next round.