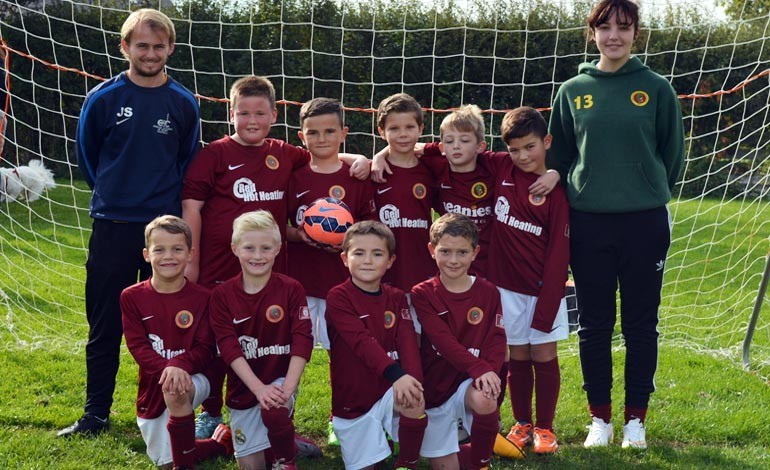 The Aycliffe Juniors football weekend began again with a girl’s taster session on Friday evening. This week was for 7-10 year olds introducing them to the game and it was a great evening for all.

The Under 7’s braved some terrible conditions to play the unbeaten Billingham United. It was well worth it as shared between goals from Ashton, Isaac and Kai as well as some great defensive work earning a 6-5 win. The goals continued in the second game as they won again, this time 10-3. The team are now on a great unbeaten run of eight games.

The under 8’s star had been drawing great attention to the club all week as a video of a superb Rhys Galloway free kick has been viewed more than a million times across social media since last Sunday.

The Under 8’s team re-arranged their game so they could play Leven on the 3G pitch at Sunnydale. Leven took an early lead which was cancelled out by a Harvey Lee penalty and it was 1-1 at the break. Aycliffe again went behind but this time a great back heeled goal from Connor brought the game back level. A free kick was awarded wide on the left and up stepped Rhys to smash it home and win the game 3-2. Aidan was great in defence for the home team and Lucas pulled off some great saves in goal. In the second game a bright start led to a solo goal from Niall and a 1-0 lead. Emrehan added another before Leven pulled one back before half time. Niall added two more to complete a hat trick, but one was in the wrong net, and the score moved to 3-2. Three late Leven goals led to this one ending 5-3. Jacob was strong in defence, with Jake making some fine saves and Jayden tackling hard throughout. Today’s men of the match were Harvey and Niall.

The Under 11’s were at home to North Ormesby and won 3-1 courtesy of goals from Lewis, Cayless and Turnbull.

All other teams were left kicking their heels as the heavy rain led to these games being called off.