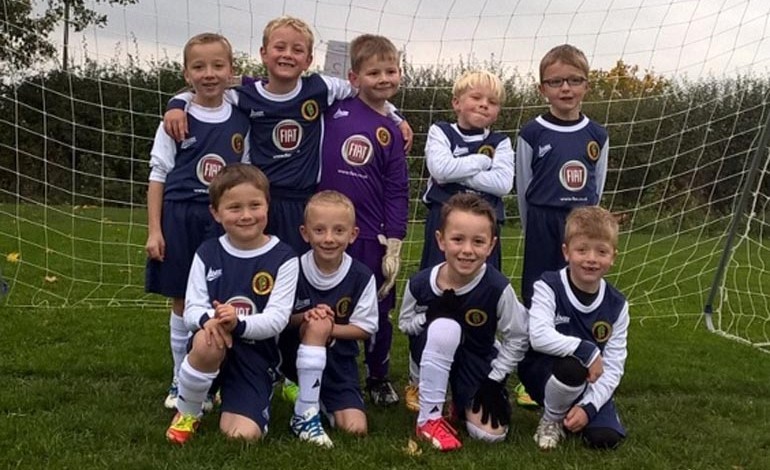 Another fantastic weekend of football for the Aycliffe Juniors teams with some great comebacks and thrilling high scoring draws, as well as wins across the age groups…

The Under 7’s (pictured) were up against Darlington RA Locomotives and the whole squad played really well. Goals from Harry and Ashton were earnt from a great team effort, Darlington added two of their own so the first game ended 2-2. The Aycliffe side dominated the second game with good passing and movement. Goals were shared between Harrison, Oskar and Roman in a 5-2 win.

The Under 8’s made the trip to play Barnard Castle Tornadoes who were known to be a good team. Aycliffe started brightly with both Niall and Harvey forcing saves from the home keeper. They found themselves 2-0 down before a great team goal was finished by Rhys to make the score 2-1 at half time. Harvey equalised soon after the break but continued pressure could not force a third at this stage. Barnard Castle broke and took the lead but it was Harvey again who struck his second to level the game 3-3 with the last kick of the match. In the second match Jack (2) and Emrehan scored in a 6-3 defeat. Men of the match today were Niall and James.

The Under 9’s were involved in a thriller at home to Leven. Finding themselves 1-0 down after only two minutes, they quickly drew level when Jason scored a great goal. Just a few minutes later Charlie scored to put Aycliffe in the lead, further shots struck the post on three occasions before half time. Leven started the second half well and their two goals had them back in front, but man of the match Jason equalised a second time to end the game 3-3.

The Under 10 TJFA team took a familiar trip to Stockton Town. They dominated the first half with all the football played in the Stockton half of the pitch. Despite the dominance it was only a 1-0 lead at the break after Zack’s goal. The second half was more even but the lead was doubled when Lucas finished Charlie’s through ball and the game was closed out from there finishing 2-0 to Aycliffe. Zack scored a screamer on the turn in the friendly game and this one ended 1-1, with the Aycliffe team depleted by players leaving to attend the Wear-Tyne derby!

The Under 11’s hosted Wynyard Village and Cayless went close to opening the scoring as the home team started strongly. Wynyard took the lead against the run of play, before Turnbull got the equaliser. With the game at 1-1 Wynyard again broke and added a second, Turnbull though was on hand to equalise again. Aycliffe were bossing the game at this stage but conceded again to set up a great finale. With the game coming to an end a fantastic long range free kick from Hillman drew the game level at 3-3 to earn a deserved draw for the home team.

The Under 12’s lost out in their derby game at Newton Aycliffe Youth Falcons. They started slowly and found themselves two goals down before Dylan Howe finished a fine run from midfield with a goal. A third goal was conceded before the break and at half time it was 3-1 to Aycliffe Youth. There were some good moments from Dylan S and Zack in the second half but two more goals went in and the game ended with a 5-1 defeat. Man of the match was Jamie who made good defensive decisions and never gave up.

The Under 14’s played away at second in the league Cleveland Juniors, it was an even start to the game before the home team took the lead. This lead was quickly wiped out by Hynes’ goal but Cleveland then restored their lead with two further goals before half time. In to the second half and despite an increased effort from Aycliffe a fourth goal was conceded and they faced a 4-1 deficit. This Aycliffe team have developed a great battling spirit and they pushed to get back in the game which is just what they did with goals from Burrows and a second from Hynes making it 4-3. The equaliser could not quite be found as time ran out on what would have been an amazing comeback, the game ending in a 4-3 loss.

The Under 18’s Black won 5-2 away at Stranton FC. Things did not start well as Stranton bossed the game through their talented central midfielder and took a 2-0 lead. A change in formation and better application from Aycliffe brought the game back to level terms at 2-2, after a penalty scored by Scott and a goal from Pugh before the interval. Pugh added another soon after the break and Aycliffe had a lead for the first time. Taylor adding the fourth before Pugh completed a deserved hat trick to complete the scoring.