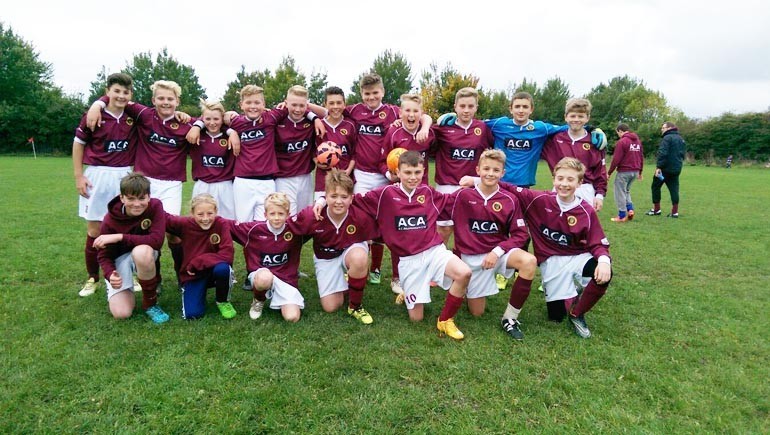 There was loads of goals at Sunnydale at the weekend and plenty of hat-tricks for the players to savour. Here is the Newton Aycliffe Juniors weekly round-up…

The Under 7’s were at home to Leven who proved to be a good passing side. Despite best efforts from the Aycliffe boys they could not break Leven down and suffered losses in both games. Isaac and Rickheim got the home goals today with plenty to build on for next week.

The Under 8’s travelled to play Mount Pleasant for what was to be a tough game. A brilliant early penalty save from Lucas in goal was followed by some great football from the Aycliffe team. However Mount Pleasant took a 1-0 lead in to half time. The equaliser came quickly from Harvey before Aycliffe fell 3-1 behind. Rhys scored a penalty to half the deficit before Harvey completed the comeback and the game ended 3-3. In the second game Emrehan scored but Mount Pleasant won this one. Men of the match for these games were Lucas and Jack.

The Under 9’s were away to Seaton Carew and after a good start to the season they suffered a setback this week as they lost 2-0. The goals came against Aycliffe in the first half and despite improvement in the second half there was no breakthrough. Reece was named man of the match

The Under 10’s TJFA side continued their unbeaten start to the league season with a 5-1 win against Bishop Auckland. A dominant first half saw the Juniors march to a 3-0 lead, Jacob got the first and Lucas added two. In to the second half and Charlie assisted goals for Lucas to complete his hat trick and then Harry. A late penalty was conceded to finish the scoring. In the second friendly game Evan got two goals with Tom and Zack adding one each in a 4-0 win.

The Under 10 Russell Foster league side went in to their game needing a draw to secure top spot in the league for the first part of their season. All looked to be going to plan as goals from Bo and Noah gave the juniors a 2-0 lead. However Catchgate Community Tigers then got in to their stride and scored 5 unanswered goals leading to a 5-2 defeat. The boys finish the season in second place and will move up to Division 5 for the winter league after a great effort with 9 wins from the first 11 games.

The Under 11’s travelled to Normanby and continued on from their battling performance last week. They moved in to a 4-1 half time lead with goals from Lewis (2), Rob and Sammy. In the second half Cayless and Turnbull joined the score sheet as a 6-2 well deserved win was earnt.

The Under 12’s grabbed a boat load of goals beating Redcar Athletic 15-0. The visitors had travelled for the game despite having a depleted squad and showed wonderful attitude and team spirit. Man of the match Zack led the way with 5 goals, Dylan got a hat trick, there were braces for Adam, Ethan and Jermaine with Kyle adding one more.

The Under 14’s (pictured above) had a brilliant derby win against Newton Aycliffe Youth winning 7-1. They started brightly and found themselves 2-0 up in the first twenty minutes. The effort continued in the second half as the juniors moved the ball well and were committed to all challenges. Such a strong performance was rewarded with five more goals to complete a memorable 7-1 win. Scorers were Martin and Teesdale with one each, Hynes getting 2 and Burrows grabbing a hat trick.

The Under 18’s Red had a hard day and suffered defeat on their travels against Spraire Lads. It was a team the Aycliffe side had not faced before and goals from Ryan Peart (2) and Lewis Race were not enough to stop a heavy defeat. Man of the match was goal keeper Arran Taylor.

The Under 23’s travelled to Stokesley, they went behind but an Oliver goal after good work from Howe levelled things and it was 1-1 at half time. They then took the lead after Slatcher’s free kick was hit low in to the box and Oliver was first to react and get the goal. With the game drawing to a close Stockesley first drew level and then nicked a late winner. It was a disappointing way to lose after such a good overall performance, man of the match was Jack Oliver.