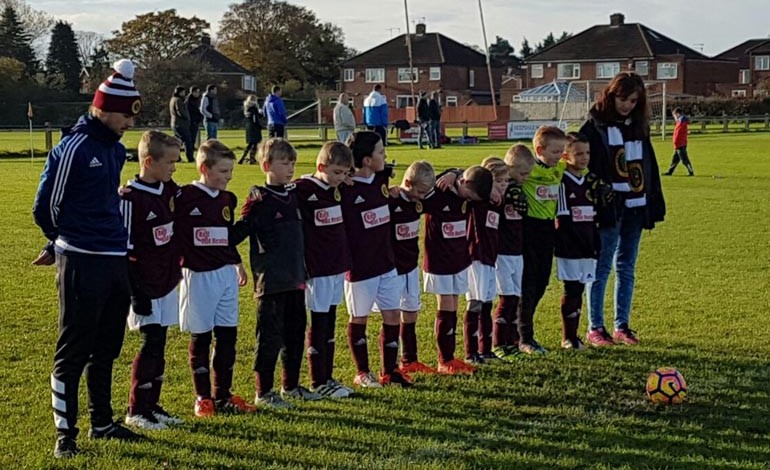 Aycliffe Juniors enjoyed a great footballing weekend as all teams respecting Remembrance Sunday with well-observed minute silences before each game.

The Under 8’s have continued to shine in TJFA Division 2 and now boast a record of playing nine games, wining six, drawing twice and only losing once. Over the course of recent games they have welcomed new players Josh, Ethan and Rhys whilst amassing an impressive 40 goals.

The Under 9 Russell Foster league team made it three consecutive wins when they played Durham United Tigers. A great start created lots of chances and Charlie’s header gave them a 1-0 half time lead. Jay scored a fine individual goal and then added another to open up a 3-0 lead. Jake added the fourth and final goal of the game and it was Jay who was named as man of the match.

The Under 9 TJFA league team travelled to play Norton and Stockton Whites. They started well with Rhys testing the keeper before Niall scored the first goal. This was the sign of things to come as a dominant display secured a 9-0 win with further goals from Rhys (5), Will (2) and Jayden. The second friendly game gave another big win and the mornings men of the match were Jayden and Niall.

The Under 10’s were at home against Seaton Carew they went behind 1-0 from an early corner. Lewis and Jake passed the ball well and created chances but the equaliser didn’t come. In the second half Seaton added another goal and came away 2-0 winners. Aycliffe played great football at times but couldn’t take anything from the game.

The Under 11 Russell Foster League team played at home against Harton and Weston. They didn’t start well and were 2-0 down before Noah’s goal halved the deficit. Noah added another in the second half but Aycliffe fell to a 6-2 defeat against the current league leaders. Matty was named as the man of the match after having a great game at right back.

The Under 11 TJFA league team faced Leven at Sunnydale. They started really positively with some great interpassing to create chances. Charlie finished a good ball from Harry to open the scoring then Jake P got the second from the penalty spot. Lucas got the next two goals and made the score 4-0 at half time. In the second half Tom was needed to make three good saves from Leven attacks. At the other end of the pitch Charlie got his second, Lucas completed his hatrick and Jacob scored in a comprehensive 7-0 win.

The Under 12’s got back to winning ways away at Sedgefield. They looked dominant from the start and were five goals up by half time. Striker Clark bagged a hatrick and the impressive Hume scored two. They conceded three goals in the second half but were 5-3 winners at the full time whistle.

The Under 15’s were playing away at Hartlepool Pools Youth it was an amazing first half! Aycliffe started badly and were 3-0 down after fifteen minutes but they then settled and played some fantastic football to be 4-3 up at half time. The goals came from Stoker and Hynes getting a brace each. The second half was a bit quieter but Stoker got two more goals crowning a man of the match display in this 6-4 win with a superb goal from a 30 yard free kick.

The Under 17’s secured a great win against top of the league Ferryhill. It was a great performance from the team and goals from Lewis Bunting (2), Kieran Maughan and Jimmy Cameron ensured a 4-2 win.