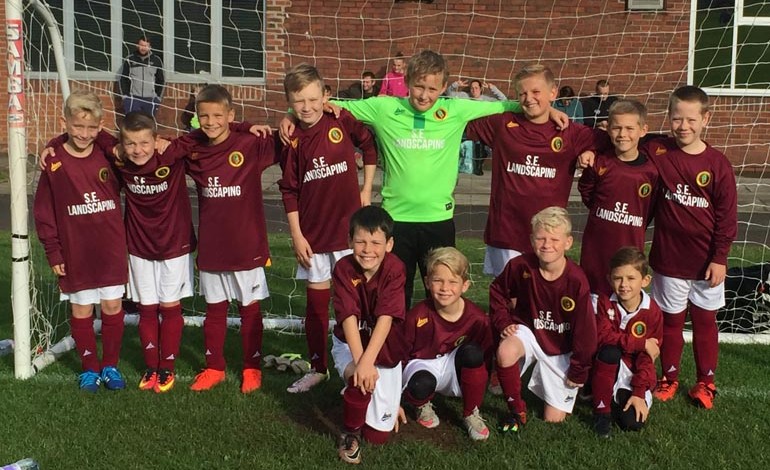 The football season has got in to full swing now with the remainder of the Juniors teams starting off their seasons this weekend.

On Saturday in the Russell Foster league the Under 9’s played a couple of games. First they travelled to face Farringdon, McKenzie scored a great volley from a Jake corner and Noah followed up Jayden’s shot to score but they lost this game 6-2. Man of the match in that game was Charlie Taylor. They then went on to play South Shields and they were in outstanding form for this game, McKenzie scored the opener again before man of the match Jayden got a hatrick in their 4-0 win.

The Under 11 team in the same league structure played at Sunnydale against Durham County Athletico. A deflected goal put them in front but Durham equalised to make it level at half time. Ted and Taylor scored before Durham got level again with two goals of their own, Taylor saved the day as he scored the winner and made the final score 4-3 to Aycliffe. Ted won both the players and parents man of the match awards for an excellent performance.

On to Sunday and the Under 7’s got their season off to great start with a 3-1 win at home against Hartlepool Pools Youth. It was this teams first competitive match and they played some great attacking football. The goals came from Dylan, Alex and man of the match Thomas. In the second game the boys turned on the class and scored through Jamie, Lewis who was named as the man of the match then Thomas and Joshua also bagged goals in a good win.

The Under 9 TJFA league team had a thrilling game which ended in a 4-4 draw against local neighbours Heighington. Harvey and Niall got the first two goals for Aycliffe as they made a great start. Heighington pulled one back then in the second half Jayden rounded the keeper and made it 3-1. It was not to stay like this and Aycliffe found themselves 4-3 down before a Rhys free kick levelled the game at 4-4. In the second game Will scored in a 3-1 loss, the mornings men of match were Niall and Daniel.

The Under 10’s looked great in their new kit, kindly sponsored by SE Landscaping (as pictured), for their trip to Leven and the squad were at full strength for the match. The game began with lots of Aycliffe possession and a few chances. On the ten minute mark Alfie Brown headed a Jake corner in to the net to make it 1-0, a great debut goal for Alfie. Leven did come back but Jude made some good saves and Jack Cooper had a super debut in defence to keep Leven out. A good all round team performance secured the win and Reece was named man of the match.

The Under 11 TJFA team were proud to have seven players involved with the Darlington and District schools team on Saturday. The squad then travelled to play North Ormesby on Sunday. The first half ended with the team in control at 4-0 courtesy of two goals each from Joseph and Zack. Zack’s first goal was a lovely strike in to the top corner from outside the box. The second half saw Joseph add two more goals to finish up with four in total and Aaron scored with an amazing long range effort to conclude a great 7-1 win.

The Under 12’s started their league campaign against Dormanstown. They were up for this match and tested the opposing goal keeper several times early in the game. However at half time they were 1-0 down. A quick fire brace from Sammy Clark though gained a 2-1 advantage and he soon completed his hatrick to make it 3-1. A late consolation goal was conceded I the 3-2 win. Man of the match was the hatrick hero Sammy Clark.

The Under 13’s had a tough day at the office and suffered a 7-1 defeat against Seaton Carew Tigers at Sunnydale. They started well and the game was evenly balanced but the visitors scored two goals late in the first half to get a 2-0 lead. Aycliffe conceded another before Adam finished a great run with a goal. After this Seaton Carew were the stronger team and deserved the win. Harry was selected as Aycliffe’s man of the match by the visiting manager for a fine effort in a losing team.

The Under 15’s travelled to Cleveland Juniors and it proved to be a tough task. After Haynes and Burrows both went close early on goals were then conceded and Aycliffe found themselves 4-0 down at half time. Haynes got a deserved goal but the game ended in a 5-1 defeat.

The Under 17’s hosted Hartlepool Youth at Sunnydale, after they got used to the conditions the goals were fired in. Lewis Race opened the scoring then Sam and Nathan both scored to extend in to a 3-0 lead. Sam and Lewis both got their second goals and it was 5-1 at half time. In to the second half and hatricks were completed by each of Sam, Lewis and Arran. The lads switched off a bit and conceded goals and the score was made to be 10-5. At the close Tom finished the move of the game for his first goal before Sam added his fourth in a comprehensive 12-5 win.

The Under 23’s game away at Whinney Banks had to be abandoned after a back injury to an Aycliffe player required an ambulance to be called. Everyone at the club hopes that Jack has a quick recovery from his injury.