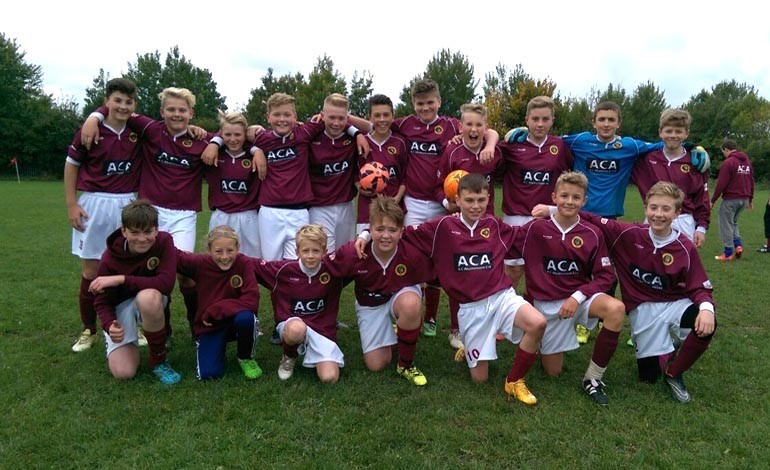 The Aycliffe Juniors football season continued over a cold weekend with some teams squeezing two games in to catch up on fixtures and others not getting in on the action, due to some wintry weather.

The Under 8’s played a re-arranged game on Saturday at Middleton Rangers. Yet another amazing free kick from Rhys gave a 1-0 lead and further chances followed but the score did not change before half time. Aidan was having a great game in defence and Lucas had little to do in goal, however a late free kick from the hosts levelled the game at 1-1 and this is how it ended. The Aycliffe side put in a strong performance that really deserved more from the game, the man of the match was Rhys.

This team were back again on Sunday with the benefit of being able to play on the 3G pitch at home against Spraire Lads. It was the visitors who started the game strongly and took a 1-0 lead, Connor and Aidan’s hard work in defence and Lucas’ saves were preventing any further goals. A good passing move from Aycliffe saw a shot blocked which Harvey finished to equalise before half time. Spraire regained the lead in the second half and the game ended 2-1, Harvey Lee took the man of the match in this one. The second game was a different story and Aycliffe won 8-1, goals from Niall (4) with Jacob and Jake both getting a brace. A particularly good effort from Niall and Jake who are playing a year above themselves, Niall’s man of the match performance was noted by the Middlesbrough FC scouts who were in attendance.

The Under 9’s game away at Darlington All Stars survived the conditions. A poor start from Aycliffe saw them concede two early goals and go in to the break 2-0 down. A bit of a re-shuffle at the interval, and Lewis had a long range shot which Charlie tapped in at the far post. Reece then lobbed the keeper to bring the game level at 2-2. Despite the visitors now dominating, with man of the match Jason to the fore, All Stars snatched a late winner for a 3-2 win.

The Russell Foster winter league started for the Under 10 side against HFC United Whites. Players moved in to different positions to cover for those unavailable and a solid start was rewarded with Evan’s goal, which finished off a nice cut back pass from Isaac. Noah doubled the lead in the second half before a counter attacking move halved the advantage. Aycliffe held on for a 2-1 win. Evan was given the players man of the match award.

The Under 14’s (pictured above) played Kader FC in an afternoon kick off and despite missing a few players they put in a fine performance. A great start saw Burrows score after some fantastic build up play. Another team move was finished by James Imelia before Hynes grabbed the third before half time. Stoker ventured out of goal for his first outfield appearance in three years and managed to head in the fourth goal from Martin’s cross. Two goals were conceded at the other end and Aycliffe ended the game 4-2 winners. This was a great team effort to move the team up the league.

The Under 18’s Red were away at Leven on a pitch that was predictably wet and muddy. The visitors were glad it was deemed suitable for play as they ran away with a 4-2 victory. Jay Lee Nelson, Ryan Peart, Morgan Claydon and man of the match Lochie Scott were the scorers.

After the postponement of their last four games the Under 23’s were pleased that he Sunnydale pitch was playable for their game against Stokesley. The scoring was opened when Martin rounded the keeper and put Aycliffe in the lead. Martin then put in the cross that Slatcher finished to put the home team 2-0 up. It was 3-1 at half time as once Stokesley got one back Oliver’s neat finish retained the two goal lead. In the second half Martin added two further gaols to complete a hat trick and put the game past the visitors at 5-1. Gibson’s penalty cancelled out Stokesley’s second and the game ended 6-2. David Gibson was awarded man of the match for his industrious work amongst several strong performances.

The Sunday morning games scheduled on the grass pitches had little chance of surviving the overnight conditions so the rest of our teams wait until next week for a game.