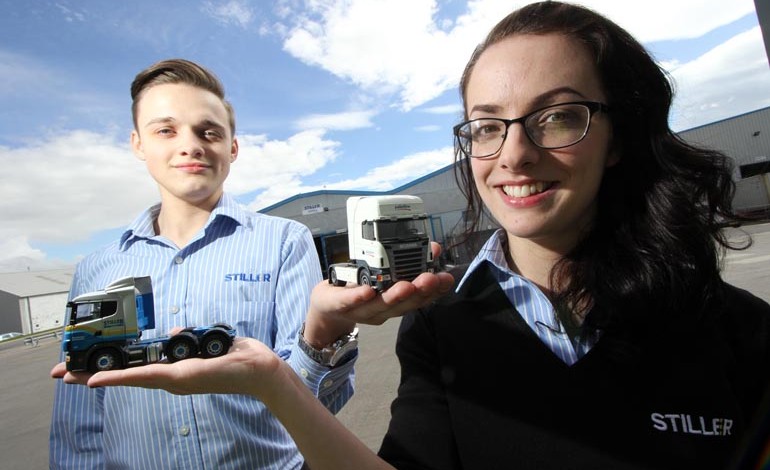 A Newton Aycliffe company is encouraging young people to “Love the Lorry” during a national week of action to promote the logistics industry.

Family-run Stiller Warehousing and Distribution is joining a number of other firms from the region in a schools initiative as part on the Road Haulage Association’s annual National Lorry Week this week.

The transport and logistics sector needs 45,000 drivers to join the industry to plug a forecast skills gap.

Stiller and other County Durham businesses – including Hargreaves Logistics, the Banks Group, Beamish Transport and Elddis Transport – are aiming to inspire the next generation of workers.

They’ll be taking trucks and lorries into schools around the region to engage with youngsters, while also delivering presentations about other job opportunities there are within the industry.

Stiller commercial manager Matthew Stiller said: “There are lots of career opportunities within the logistics sector and we’re very proud to be involved with the RHA’s national week of action, to promote our industry.

“So while it’s very important for us to promote the driver jobs that are available in the transport sector, we want to promote it as a career choice to young people as well.”

As part of the RHA’s Love the Lorry week, which is being held from September 19-24, there will be national events as well as local initiatives.

On a local level, Stiller will take a lorry into Greenfield Community College’s Sunnydale Campus in Shildon on Thursday (September 22).

Logistics clerk Keiran Jones, from Newton Aycliffe – pictured (above) with customer services executive Suzie Kitchen – was recruited as an Apprentice more than two years ago.

The 19-year-old said: “It’s really important that we raise awareness of the transport and logistics industry among young people who might not be aware of all the different types of jobs there are.

“I joined Stiller two years ago as an Apprentice admin assistant and now I’m distribution clerk, with future opportunities to progress within the company, so it can be a very rewarding and enjoyable career choice.”

RHA Northern area manager Malcolm Dodds said: “This is the second Love the Lorry Week and we feel it’s vitally important to promote awareness of the transport and logistics industry and the opportunities that exist within it.

“It’s always important to remember that if you’ve got something, a truck probably brought it, and we’re trying to instil that into young people and educate school-leavers on the career paths available to them.

“Stiller has always been very proactive in promoting the industry and specifically the recruitment of drivers with some very innovative ideas, and we welcome the support of all operators within the sector.”

Stiller has an excellent track record of promoting the logistics industry and has benefited from several innovative recruitment programmes.

The company has previously run successful programmes to attract ex-servicemen and overseas employees in a bid to combat a nationwide shortage of drivers.

And earlier this year, the company launched its own in-house “earn while you learn” training pathway programme, which targeted potential young employees who have no previous experience of driving HGVs.

Three new drivers will eventually be taken on every two months – costing the company £5,000 per driver in wages and training – as Stiller looks to increase staff numbers this year, meaning the scheme could cost the firm up to £90,000 a year.

Stiller will also loan each driver £1,250 to pay for the HGV class C practical training and test fees with a nearby driving school, which will be paid back over six months.

The successful applicants on Stiller’s pathway programme will spent up to two months undergoing Stiller’s own in-house training while earning £400 a week before taking their HGV test.

Matthew Stiller added: “That programme has proved a success already and continues to run in the background.

“But we’re always on the look-out for new drivers, especially young people either leaving college or the armed forces, or those just looking for a career change.”

The firm’s turnover climbed from £10m to £13m in 2015, after the firm made significant investments of more than £5.7m on equipment and people over the last two-and-a-half years.

That followed the acquisition of a fleet of 12 new vehicles, including two 12-tonne vehicles, two urban trailers and four long double-deck trailers in 2014.

• Potential drivers, who must have a clean driver’s licence for a minimum of two years, can send their CV to [email protected]