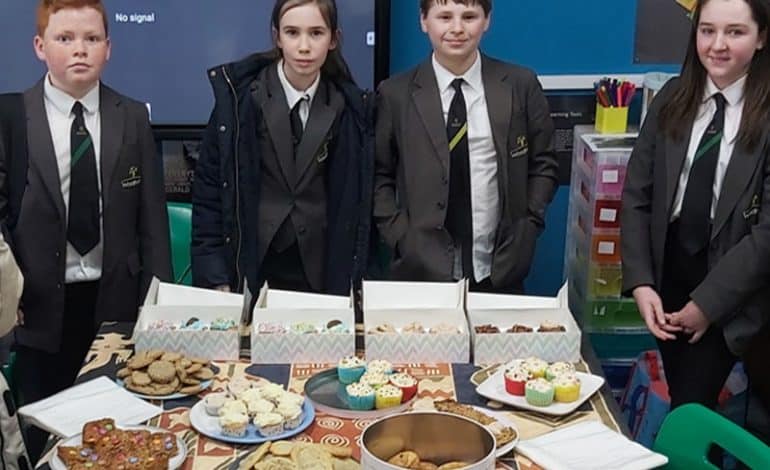 A group of students at Woodham Academy held their second bake-sale in as many months recently as part of their continuing efforts to help finance an Eco Academy within the school.

The event raised an impressive £154, the proceeds being divided between the Eco Academy and its current charity, Rhinoceros conservation.

Despite only being launched at the beginning of January, the Academy has already left its mark on the school.

In January, students announced the inauguration of their group with a bake-sale, and followed this up with a Love You, Love your Planet event on Valentine’s Day – with group members producing environmentally themed cards and envelopes to sell to other students. They have also opened an Eco Shop, which daily provides a wide assortment of stationary and gift items to suit every pocket. All of the articles in the Eco Shop are carefully vetted, to pass rigorous environmental standards, and that includes the recycled and biodegradable pens and notebooks, wooden rulers and pencils made from reclaimed newspaper, etc.

Academy members are presently making bird boxes and bat boxes for instillation in the school’s grounds, alongside maintaining a wild-flower patch (they have recently been raking-off grass cuttings, to encourage wildflower growth).

One of the guiding lights of Woodham’s Eco Academy is Y10 student, Melody Towler. Melody was involved in the academy’s previous incarnation, Wildlife Club, which, amongst other achievements, planted 400 young trees on the site.

Melody sees the difference between the Wildlife Club and the Eco Academy as one of scale: the ambitions of the Eco Academy, are, she says, much bigger, and includes an ongoing bid for Eco School (often referred to as Green Flag) status.

This, says Melody, would require the whole school to incorporate environmentally aware practices into aspects of planning and implementation.

In effect, turning the whole school into an eco-school. A tall order? Perhaps, but Melody is confident it will be done, because, she says, it needs to be done.

And Melody is a girl who knows all there is to know about determination. As a recipient of Ehlers-Danlos Syndrome (EDS), Melody doesn’t know from one-day-to-the-next if she is going to arrive at school on crutches or in her electric-wheelchair, but she does know what she wants – she wants us to address the damage we are inflicting on our home planet, and to stop before it is “too late”.

“We have a responsibility towards the animals and plants we share the world with’, and on whom we rely,” she said.

“To ignore that fact, and to carry on regardless, is short-sighted and reckless.”