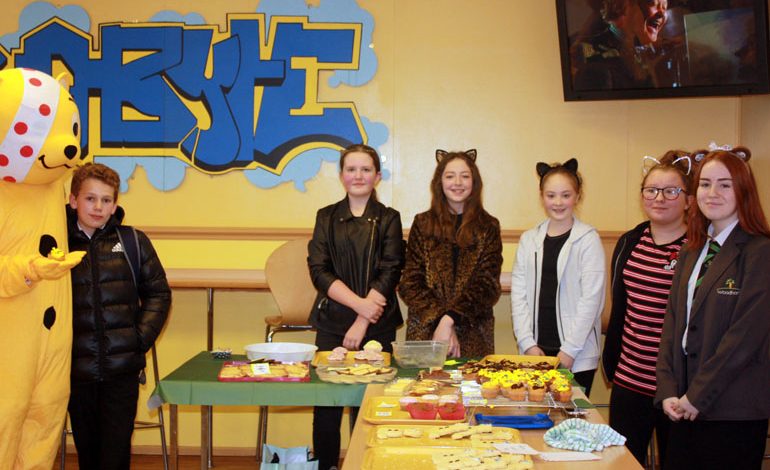 The annual tradition of fundraising for Children in Need fund returned to Woodham Academy earlier this month.

The academy has been raising money for the charity for over 10 years; this year the event was organised by Miss Ellesha Gray, teacher of English.

The whole school actively participated in the event, in terms of sponsored silences, fancy dress, sponsored football matches, and the sale of raffle tickets in order to win a Pudsey cake made by the academy’s resident chef, Linda Vipond.

In addition to a raffled cake, other sweet treats were made and sold by students during break and lunch time.

The day was a resounding success, allowing a day of fun to be constructive in terms of raising both money and awareness for the cause of Children in Need.

The day started with a guest appearance from Pudsey himself who welcomed the students into school.

Members of the public even stopped to say hello to Pudsey and donate at the gate.

At break time, Pudsey participated in group photos with students to depict their fund raising efforts.

Throughout the day, students were witnessed braving the cold dressed in their pyjamas and onsies. All year 7 and 8 students were encouraged to take part- some organising the usual sponsored silences and fancy dress day, with the addition of some innovative ideas such as: sponsored car washes, handcuffing to a friend for 24 hours and a cinema night at school where pupils watched and sand along to The Greatest Showman.

The students made a superb effort in both raising money and their positive attitude towards the event.

As a result of the massive success of the Children in Need event hosted by Woodham Academy, the students, teachers, staff and other contributors have managed to raise £1046 so far.