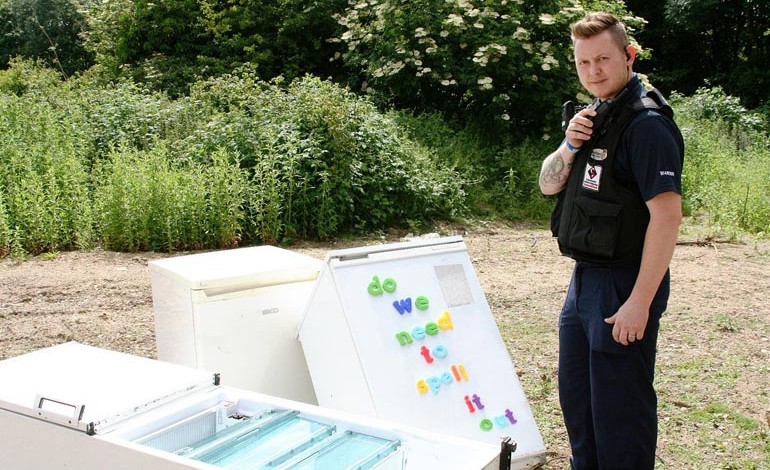 The consequences of illegally dumping waste are being spelt out as part of an ongoing crackdown on flytipping in County Durham.

Operation Stop It, a multi-agency taskforce involving Durham County Council, has seen flytipping incidents plummet by 32% since the campaign was launched in November 2014.

The next phase of the drive will focus on educating people about the impact of dumping white goods, such as fridge-freezers and washing machines.

Ian Hoult, neighbourhood protection manager, said: “Whether it’s waste from a business or from the home, everybody has a legal responsibility to dispose of their rubbish correctly.

“This is particularly important when it comes to white goods, which we often find dumped after having their fixtures and fittings removed.

“It is pleasing to see that flytipping across the county has reduced since the launch of our campaign, which shows the message is hitting home, but we still have to spell it to some that dumping your rubbish illegally will not be tolerated.”

Meanwhile, as part of Operation Stop It, 17 prosecutions were progressed last month (June) through the magistrates’ courts for offences around illegally dumping waste.

The following figures were also recorded in June:

Other statistics recorded in June revealed that 137 people were handed fixed penalty notices (FPNs) for committing environmental offences in the county – most were for littering while other offences included dog fouling and for having untidy yards and gardens and failing to comply with litter clearing notices.

The FPNs were issued by the council’s neighbourhood wardens who work with police and other agencies to tackle environmental issues, including flytipping, dog fouling, stray dogs, littering and antisocial behaviour.

Wardens removed 157 stray dogs, highlighting the importance of getting pets microchipped so they can be returned to their owners if they become lost or stray.

More than 60 reports of antisocial behaviour were investigated and teams attended 198 incidents passed from police airwaves.

Eight schools were visited last month and more than 1,000 children were educated about the importance of being a responsible dog owner, correct litter disposal, preventing flytipping and the impact of graffiti and antisocial behaviour.

“We would always encourage people to dispose of their rubbish correctly and always use a licenced waste carrier when getting rubbish taken away from their home or business. Residents can also dispose of household waste for free at their local household waste recycling centre or by donating items to charity for reuse.”

Residents can find their nearest Household Waste Recycling Centre (HWRC) online at www.durham.gov.uk/HWRC or they can arrange a bulky waste collection from the council by calling 03000 261 000.

Businesses can find a licensed waste carrier at www.gov.uk/find-registered-waste-carrier or can arrange a council trade waste collection at www.durham.gov.uk/commercialwaste or by calling 03000 262 660.

Enviro-crimes, including fly-tipping, dog fouling and litter, can be reported online at www.durham.gov.uk or by calling 03000 261 000.

Unlicensed waste carriers and waste crime can be reported anonymously to Crimestoppers at www.crimestoppers-uk.org or by calling 0800 555 111.