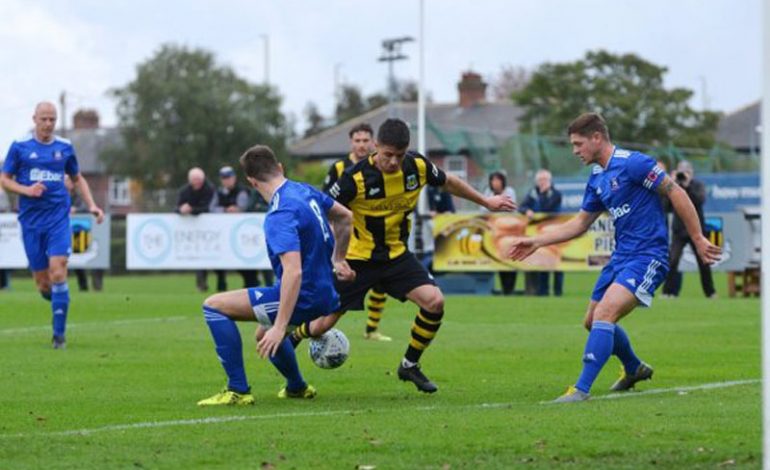 Newton Aycliffe travelled to league leaders Hebburn Town, and were unlucky to lose 2-1.

Hebburn started well and centre forward Armstrong headed wide on three minutes. He then had two further chances, hitting a shot high and wide from a good position, and directing a header from a free-kick straight at Aycliffe keeper Adam Pickford. Hebburn took the lead on 34 minutes when Dibb-Fuller hit a free-kick into the top corner of the goal.

Forward Dean Thexton was only stopped by a last ditch tackle after dribbling through the Hebburn defence. Then Marc Costello shot just over the bar following a fine Aycliffe team move.

Hebburn came back and Pickford had to tip over a free-kick from Richardson. In first half injury-time, Costello had a header cleared off the line following a corner, as Aycliffe searched for the equaliser.

The second half continued in a similar vein, with the sides trading shots.

The advantage swung in Hebburn’s favour in the 56th minute with a controversial penalty. Armstrong and an Aycliffe player went down together in the penalty box. There were no appeals for a penalty, but one was given, and Armstrong converted for 2-0.

Aycliffe responded a minute later; Shaun Ryder chased a ball out wide, kept it in and crossed for Thexton to head in his tenth league goal of the campaign.

Aycliffe pressed for the equaliser. Harrison Webster came on for his debut, and his pace gave the Hebburn defence problems.

Aaron Brown headed wide from a free-kick, Webster put a shot over the bar after being set up by Thexton and Ryder hit a set-piece into the side netting.

Hebburn counter-attacked and Dibb-Fuller had a good chance but pulled his shot wide. Aycliffe continued to press but Hebburn held out for the win.

Aycliffe’s next match is away to Easington in the League Cup on Thursday (October 10, 7.30pm). That is followed by a league game at home to Penrith on Saturday (October 12, 3pm).