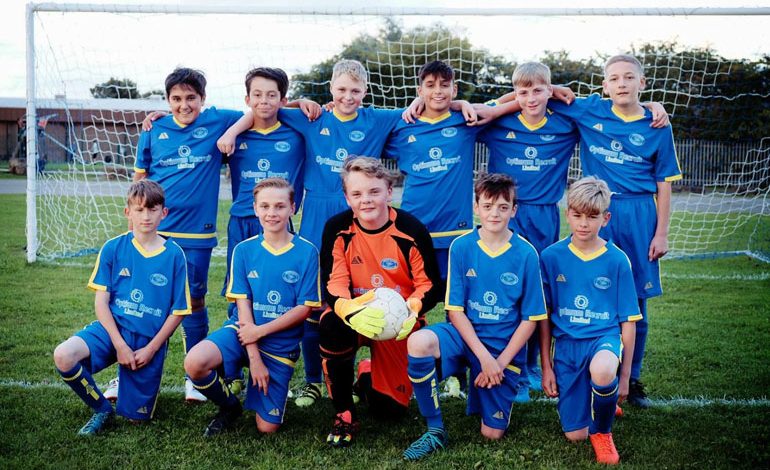 Newton Aycliffe Youth FC’s Under-13s team have started the new 2017-18 season in style – thanks to the generosity of a local company.

The U-13s ‘Eagles’ were just three weeks away from the campaign kick-off with a brand new squad preparing for 11-a-side football – but without any kit.

Manager Chris Airey appealed for local help on social media before Dan Mellanby, joint-manager of the Aycliffe senior side, donated an old strip which they were able to use for pre-season warm-up games.

But then Aycliffe Business Park firm Optimum Recruit agreed to sponsor the Under-13s side with a full new kit.

And thanks to the fundraising efforts of parents, the Eagles were also able to treat themselves to much-needed winter jackets.

It meant the lads were able to start the new season feeling like Premier League stars in their brand new gear.

“After some frantic advertising Dan Mellanby first got in touch to offer old strips from previous seasons,” said Chris.

“But then Optimum Recruit agreed to sponsor the team with a full new strip just before the start of the season.

“The old strips from Newton Aycliffe haven’t gone to waste and are instead now being used a training kit for the team every week.

“It really is pleasing to see the local business and sporting community coming together and supporting youth sport within our town.

“Without the help of Danny and Craig this team simply wouldn’t have the kit to play the sport they love. On behalf of myself and all of the team we owe them a massive thank you.”

Optimum Recruit owner Craig White said: “As a business based, and with our roots firmly in Newton Aycliffe, we feel it’s very important to give back to our local community.

“As well as the football team, we also sponsor Aycliffe Dance Academy’s annual show, and we hope to be able to continue to support local organisations in achieving their goals for many years to come.

“I’ve also known Chris (Airey) a long time personally, so I was happy to help out to make sure the team had a kit in order to compete this season.”