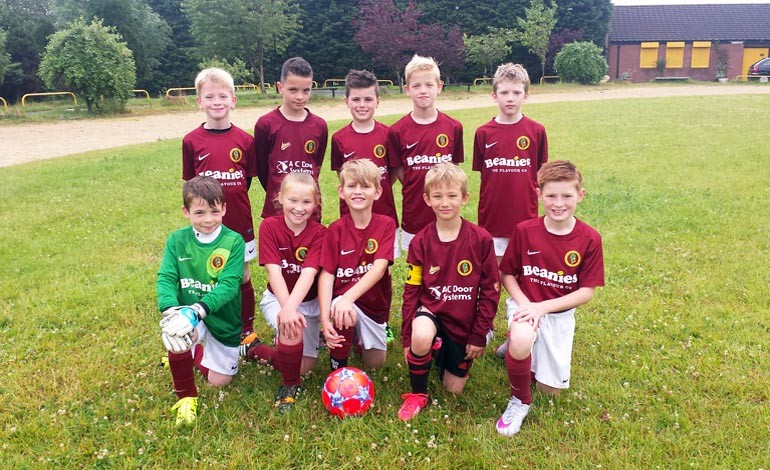 Only one Aycliffe Juniors side was in action last weekend with the Under 10’s continuing the early stages of their Russell Foster League season with a 3-1 win against Jarrow FC Phythons.

The team started with Matty in goal, Oli, Sam, Evan, Taylor, Bronton and Bo starting in the outfield positions with Chloe, Isaac and Ted set to join the action later from the subs bench.

NAJFC Started the match at a blistering pace, with Evan, Taylor and Bronton moving the ball very well between them from the kick off.

They created several early chances but were up against some good goalkeeping and Bo, Evan, Bronton, Taylor & Sam were all stopped from scoring.

In defence Oli was breaking up the play with well-timed tackles, and moving the ball well to the wingers.

Matty had little to do in goal in the first period, he still had to concentrate and be quick to thwart Jarrow’s quick breaks. Ted, Isaac and Chloe all came on, fitting straight into what was a high paced display.

NAJFC’s dominance was rewarded when a good passing move saw Bronton’s shot blocked by a Jarrow defenders hand in the box, Sam driving the resulting penalty home to give NAJFC a 1-0 lead at half time.

Oli went in goal at half time with Matty moving up front. He soon took advantage of his move from keeper to striker expertly finishing an outstanding defence splitting pass from Taylor – 2-0 to NAJFC.

With the game remaining quick, Bo managed to dive into a challenge, coming out with the ball, playing it to Bronton whose skilful run beat several players then a good pass found Taylor in the box, who calmly knocked the ball past the keeper into the bottom corner, giving NAJFC a commanding 3-0 lead. Chloe then moved up front and went close with an effort to extend the lead.

As the game was closing out, a good move from Jarrow saw their forward fouled, giving Jarrow a penalty – Oli got his hands to the effort, but there was just too much power to prevent it going in.

The first part of their Russell Foster season concludes on Saturday with a game against Jarrow FC Scorpions, before a derby friendly against NAYFC on Thursday 16th July.

If you want to get involved with the Under 10 squad, who also field a team in the TJFA league, then training re-starts at Sunnydale on Thursday’s 5.45 -7pm from the 23rd July. The first six weeks back are to be led by the FA Skills coaching team and all new players are very welcome.

Other NAJFC sides back in action are the Under 7’s who re-commenced training from last Monday, just come along any Monday for training 6-7pm or contact Brett Lambert on 07903 718088.

The Under 18’s are having open trials on the the 12th July from 12-2pm, if interested come along or contact Joe Petrozcy on 07798 680235 – all sessions are at Sunnydale Leisure Centre and as always all new players are very welcome.