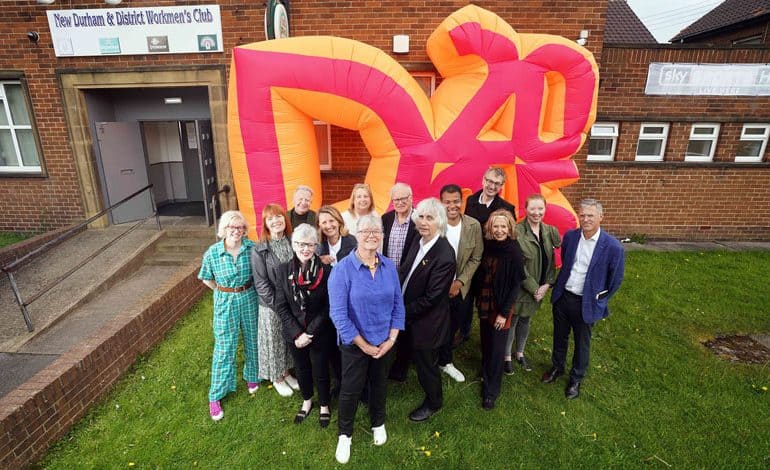 Ambitious plans to drive growth, spark creativity and celebrate the extraordinary people and places of County Durham was showcased to the UK City of Culture 2025 judging panel on Monday.

An exciting and immersive timetable of activities was arranged for the judges’ eagerly anticipated visit, which follows the shortlisting of Durham’s countywide bid in March.

County Durham is vast and varied and the aim is to shine a light on the county in all its guises, while demonstrating how the pioneering and inclusive cultural programme being developed for 2025 would reenergise the entire region.

Historic Durham, wild Durham and industrial Durham were all represented during the visit, with the judges splitting into groups to allow as much of the county as possible to be showcased.

The day began in Durham City at Redhills, the historic home of the Durham Miners’ Association whose moto inspired the title of County Durham’s bid – ‘Into the Light: The past we inherit the future we build.’

As part of the visit, some of the panel will then headed to Dawdon, on the east coast, where they met local people who have engaged in a community arts project called Beaches of Dreams.

Other members of the panel travelled to Bishop Auckland to find out about the major regeneration projects underway in the area.

The judges reunited for lunch at New Durham Working Men’s Club in the city.

The visit culminated at the Ogden Centre, where the judges heard about the work of Durham University’s cosmology and astrophysics departments.

The Durham 2025 campaign is being driven by Durham County Council, Durham University and Culture Durham, a partnership of more than 20 cultural organisations from across the county.

Cllr Amanda Hopgood, leader of Durham County Council, said: “Durham is such a diverse county and, while it’s impossible to show the judges everything during their visit, we really want to give them a flavour of the variety that exists here.

“It’s also important for us that the judges met the people who will benefit if County Durham is named UK City of Culture 2025.

“Whether that be our communities who will be able to access exciting new opportunities or our businesses, which would benefit from the increased visitor numbers our 2025 programme would attract.

“However, we also face challenges. The development of our bid has provided hard evidence that the cultural, economic and well-being changes that we need to fulfil our huge untapped potential can be achieved or catalysed through UK City of Culture 2025.”

This year, for the first time, the Department for Digital, Culture, Media and Sport broadened the UK City of Culture competition to allow counties and districts to apply, resulting in a record-breaking 20 entries.

In March, County Durham was one of just four locations to make it to the shortlist. The winner is due to be announced later this month.

If County Durham secures the title, it would bring colossal social and economic benefits to the entire region.

This includes creating thousands of jobs, boosting the creative and visitor economies by millions of pounds, empowering residents and helping to improve community wellbeing.

And with the county’s profile and appeal raised nationally and internationally, the benefits of being UK City of Culture 2025 would be felt for years to follow.

To find out more about Durham’s countywide bid to be UK City of Culture2025, visit , visit www.durham2025.co.uk and follow the Durham 2025 social media accounts at www.facebook.com/Durham2025, www.twitter.com/durham_2025 or www.instagram.com/Durham2025_