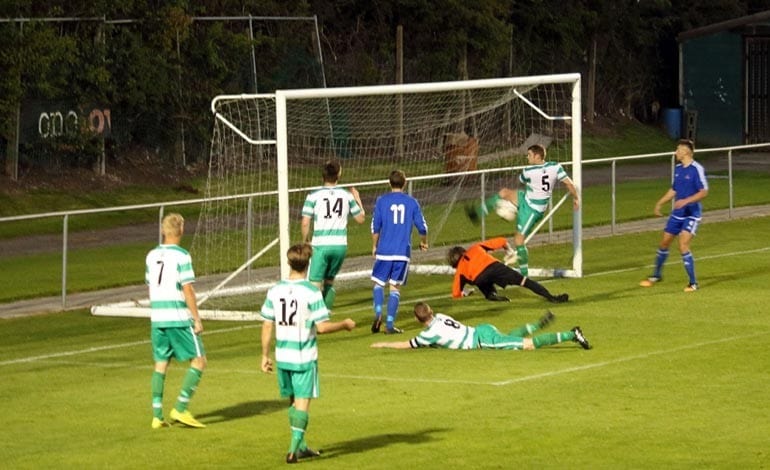 Matty Moffat opened his account for Aycliffe with two goals in a comfortable win at West Allotment Celtic.

Aycliffe gained the three points with a 4-0 scoreline against the Newcastle side on Wednesday night.

The first half saw Aycliffe make a hesitant start with keeper James Winter needing to make an early save, punching a shot away after only five minutes.

Both sides had efforts in the first half but mostly well off target. Aycliffe began to come to life as the half progressed and Jack Gibson came close on 36 minutes with a shot from 25 yards which skimmed the crossbar.

Within five minutes Moffat scored his first goal. Perfectly judging the bounce Moffat cut inside the defender, onto his right foot, firing low past the advancing keeper.

Aycliffe dominated the second half. After 54 minutes Stuart Banks dribbled his way past the defence scoring with a shot past the diving keeper.

Paul Garthwaite joined the action on the hour replacing Ritchie Archer. He was soon causing problems for the home side and just missed connecting with a Banks cross.

Both players were involved in Moffat’s second goal on 65 minutes. Garthwaite played the ball wide to Banks. His cross from the wing found the striker in the box who scored with a low header.

Aycliffe pressed for a fourth which came from a Jordan Laidler free kick after a foul on Zak Boagey three minutes from time.

Aycliffe now head for Lancashire to meet Nelson in the FA Cup Extra Preliminary Round.

The two wins in the opening week of the season will give Peter Dixon’s team confidence for the cup match.