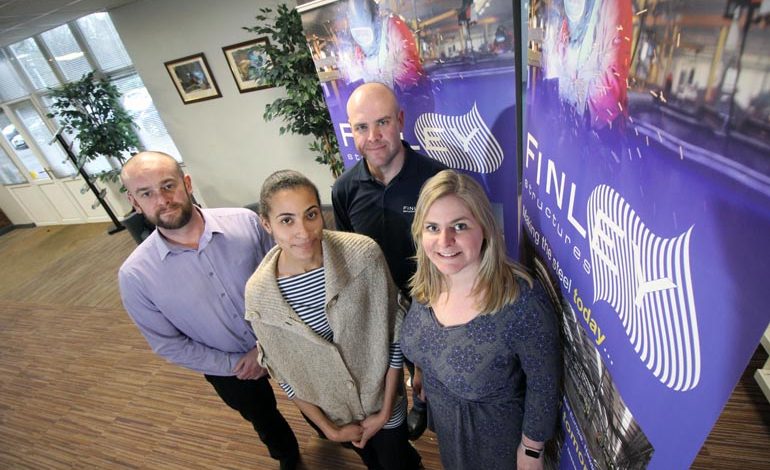 Two new members of staff have joined a Newton Aycliffe steel firm as it continues to grow.

Neil Ryan has joined family-run Finley Structures, based on Aycliffe Business Park, as site supervisor and Crystal Moss-Henry has been appointed payroll administrator.

The new recruits have boosted Finley’s staff numbers to 63, with the family’s group of companies – including Finley Structures, SCH Site Services (45) and the ROF 59 activity centre (47) – now employing 155 people in total.

Neil, from Middlesbrough, has been in the steel industry for the past 19 years, progressing from steel erector to site foreman, and now site supervisor.

“When the chance of working as a site supervisor for Finley Structures came about it appealed to me straight away,” said Neil.

“I’m excited about the opportunity and looking forward to the challenge.”

Meanwhile, Diane Ruston and Andrew Workman have both gained new promotions within the company.

Diane, who joined Finley Structures as a senior quantity surveyor in May 2014, is now commercial director.

She had previously worked for a major national construction company after graduating from Warwick University in 2004 with a degree in economics, before joining Finley Structures almost three years ago.

Andrew, a former apprentice welder, has been with the company more than 13 years and has recently been promoted to estimating manager.

He completed an apprenticeship in fabrication and welding with the Army after leaving Woodham Academy in Newton Aycliffe in 1991.

After leaving the forces, Andrew worked for a number of other firms as a welder or fabricator before joining Finley Structures, working his way up from a welder to a supervisor’s position and then workshop foreman before he moved into the office as an estimator.

Finley Structures, which is still looking to appoint a new quantity surveyor, a contracts manager and an estimator in the near future, is well known for erecting many high-profile buildings in the North-East in recent years.

The family firm, established by John Finley in 2000, fabricated and erected the steel for Hitachi Rail Europe’s train-building factory on Aycliffe Business Park and Nissan’s new Leaf factory at its Washington site.