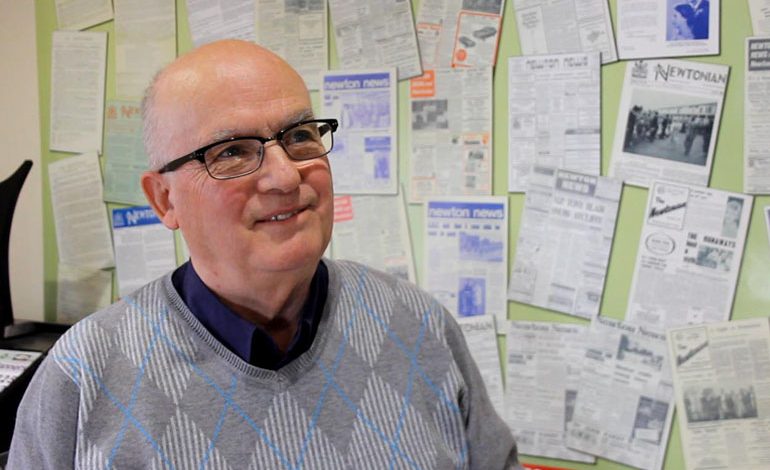 Politicians, local groups and sports clubs have led the tributes to Newton Aycliffe community legend Syd Howarth, who sadly passed away on Monday.

The Newton News confirmed Syd’s passing, eight days after his 81st birthday, surrounded by his family at Darlington Memorial Hospital, after a year-long battle with Motor Neurone Disease (MND).

“We have such a massive loss in our lives our hearts are breaking,” said Stuart Howarth, one of his three sons.

And the Aycliffe community has joined the Howarth family in mourning the loss of the town’s greatest-ever ambassador and champion with touching tributes to “Mr Newton Aycliffe”.

After establishing the town’s only printing press and community paper, Syd went on to serve on a number of community groups and committees – at one time, he was chairman or a committee member of no fewer than 11 organisations – and in 2016 was awarded the MBE for his lifelong services to Aycliffe.

The town’s mayor, John Clark, said: “I was brought up with the Newton News, and Syd was very much a father figure for the town.

“My thoughts are with his family at this time, I know his three boys really well, but I’m sure they will take great comfort from the fact Syd has left such a lasting legacy for Newton Aycliffe. It’s a very sad day for the town.”

Councillor John Clare said: “Syd Howarth was an unassuming yet hugely influential man who stated that his life’s goal was to ‘help somebody as I pass along’.

“For more than half a century – through his charitable work, community involvement and the pages of the Newton News – he shaped Newton Aycliffe and its development as a new town, and the community we have become is his legacy.”

Meanwhile, Sedgefield MP Phil Wilson said: “Syd Howarth was one of the first people I met when I became the Labour candidate in the Sedgefield by-election back in 2007. I could tell then he had the best interest of Newton Aycliffe at heart.

“He wasn’t just a successful businessman, he was a great supporter of the local community.

“Everyone knew Syd on the town and the work he did for charity. That is why the accolade of Mr Newton Aycliffe was well deserved. He will be greatly missed by his family, friends and the people of Aycliffe.”

Carol Gaskarth, chief executive of the Pioneering Care Partnership at Cobblers Hall, said: “Syd was an amazing man, everything he did was with the best interests of local people in mind, and his selfless approach was admirable.

“He enjoyed being part of the community and dedicated his life to Newton Aycliffe through his business but also through the Rotary Club and by giving hours upon hours of his time to support good causes, including PCP as a trustee and member.

“Syd lived life to the full, seeing potential wherever he went, and always encouraging people to celebrate success and grab opportunities by both hands.

“My heart goes out to his family and friends at this very difficult time, he will be a huge miss but his work and memory will be everlasting.”

Nev Jones, boss of local firm J&C Coaches who’s also involved with the local Rotary Club, said: “I was lucky enough to have known Syd for over 50 years.

“I grew up with his children and spent many happy times during my childhood at their family home in Isherwood Close.

“Always approachable and kind, it was Syd whom my dad turned to when he left the fire service. Syd’s advice to my dad was to follow his dreams, and J&C Coaches was born.

“Later in life, Syd invited me to join the Aycliffe Rotary Club, when I saw first-hand his flair and dedication to fundraising and his charity work, always putting the needs of others before his own.

“His dedication to the townsfolk was finally rewarded when he was awarded the MBE, and I was privileged to be at the after-party.

“I was also honoured to be asked to perform with our band, Groovy Street, at Syd’s 80th birthday party only a year ago.

“A friend and an inspiration, I will miss him terribly.”

As well as helping community groups and businesses, Syd was always keen to help promote Aycliffe’s many local sports clubs over the years.

Allan Oliver, chairman of the town’s football club, said: “Syd supported us massively from the very start of our journey from Saturday park football right through to the Northern League.

“There was one thing we needed to get fans through the gates and that was local publicity. Syd stepped up and promoted the club in the Newton News, which made a huge contribution to our success and promotions through the divisions.

“We thank Syd for the help he has given us over the years and we offer our sincere condolences to the Howarth family at this difficult time.”

Lee Weldon, secretary of the town’s cricket club, said: “My first dealings with Syd was when I started delivering copies of the Newton News in my younger days.

“But I then contacted him when I became secretary of the Cricket Club, as we needed to publicise matches and events, and he printed every match report for the best part of 30 years.

“He was a lovely man, a gentleman who would always help and give advice, and he’ll be sorely missed by everyone on the town. On behalf of everyone at Newton Aycliffe Cricket Club, we send our condolences to the Howarth family.”

“For me personally, he always helped us publicise the youth teams and, in more recent years, was a huge help in us setting up and promoting the girls’ teams.

“But from an Aycliffe resident’s point of view, Syd was also a tireless campaigner for the town and its many community groups, and the fact Aycliffe still has a local free newspaper is a real testament to his hard work and lifelong dedication to the town.”

The Howarth family – in accordance with Syd’s personal wishes – have requested that no flowers be sent. Anybody wishing to mark Syd’s passing is requested to make donations in lieu to MND Association in memory of Syd. Please respect this request.