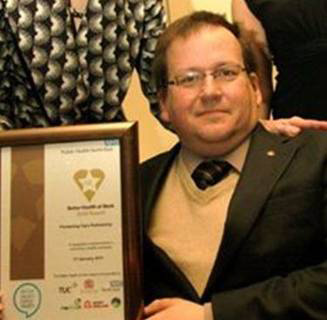 Tributes have been paid to former Aycliffe Mayor Michael Dalton, who passed away following illness.

Mr Dalton, who had represented the town for almost two decades, served one term as Mayor of Great Aycliffe, while supporting his 92-year-old mother Mary Dalton during her four stints in the role.

The 52-year-old was born with spina bifida and had battled health problems throughout his life.

Following a 12-week stay in hospital, Mr Dalton died on Sunday, July 18, having returned to the home he shared with his mother in Woodham the previous day.

Trustees, staff and volunteers of the Pioneering Care Partnership (PCP) paid tribute to its “devoted trustee and advocate since 1998”.

The centre’s chief executive Carol Gaskarth said: “Michael was particularly passionate about the Pioneering Care Centre and the broad range of facilities and services provided to aid independence and choice.

“He played a fundamental role in the development of the centre and had been company secretary, while proudly represented the organisation.

“As a wheelchair user, Michael was also keen to support us to ensure accessibility for all; he had an eye for detail, helping with Centre maintenance inspections and supporting health and safety generally.

“He was very proud of everything the organisation has achieved and was dedicated to helping us grow and thrive for almost 20 years.

“Michael was our friend, colleague and supporter. He will be sadly missed – but very fondly remembered – by all of us.”

Mr Dalton was brought up in Richmond where he attended junior and secondary schools despite his disability.

At college in Coventry he qualified as an accountant and went on to work as a ledger clerk.

At the age of 22, he spent time in a care home in Harrogate where he met Julie Fulbrook, whom he married the following year.

The pair, who both suffered from spina bifida, moved to Newton Aycliffe and had 12 years of independent living together, but in 2000 his wife died from cancer and his parents moved to the town to be close to him.

It was also during this time that Mr Dalton won a seat on Great Aycliffe Town Council and served one term as Mayor of Great Ayclffe in 2002.

Mr Dalton, who dedicated time to fundraising, was tipped to take up the role again this year but lost his seat on the council after a straw draw in the local elections in May.

He recently become engaged to Sue Ward, who he met at the Harrogate care home 30 years ago, and the pair were planning to marry next year.