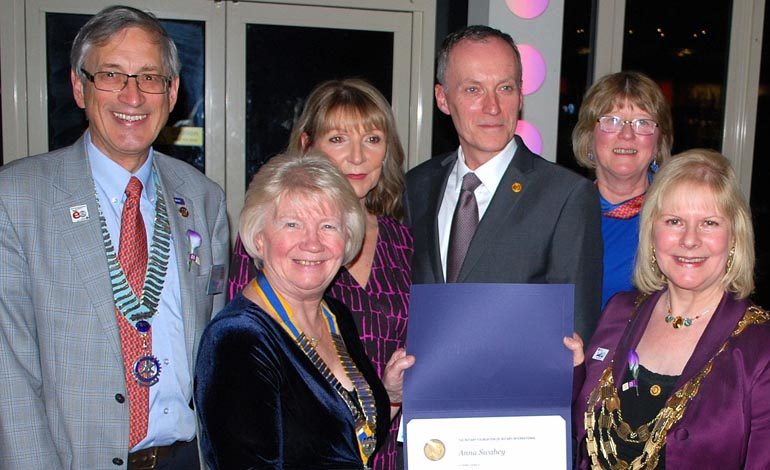 The bravery and determination of brain tumour victim Anna Louise Swabey, the 25-year-old Newton Aycliffe cancer campaigner who died in September just a day before her wedding, was remembered this week at a moving ceremony designed to mark her outstanding achievements.

The Fellowship was awarded to Anna shortly before her death when she was too sick to receive it personally.

Watching as the presentations took place were Anna’s mother, Linda, her sister and brother, Victoria and Matthew, and Anna’s fiancé, Andy Bell.

President Nora described the occasion as a ‘bitter-sweet’ event – bitter because it marked the loss of a ‘delightful young woman whose early death left a great hole in the worlds of many people’ and sweet because the award confirmed that Anna was ‘a truly inspirational individual who cared more about others than she did about herself”.

In a personal reflection, journalist Rtn Ron Eyley said that more heartfelt tributes had been paid to Anna’s courage and determination than anyone he had known in 50 years of reporting the obituaries of the great and the good – and ‘none had been more deserved’.

RIBI President Eve described Anna as ‘a wonderful, beautiful, brave person who touched the life of everyone she met’ and added: “We shall never forget her”.

And District Governor Peter admitted that while he had not known Anna personally, it was clear that she had proved ‘a real inspiration to people across the world’.

In a moving reply, Anna’s father confessed: “We miss Anna each and every day. She really was a most incredible young lady.”

Keith told Rotarians and guests how 16000 people every year were diagnosed with brain tumours and how research work was ‘woefully short of funding’.

He outlined Anna’s campaign to help secure enough signatures to force a government debate into increasing the amount of funding for brain tumour research and her determination to help raise £100,000 to permit more work to identify the cause and treatment of ‘this terrible disease’

Keith confirmed that the family intended to continue its work for the Brain Tumour Research Campaign and thanked the Rotarians for their on-going support.

The next major fundraiser would be a Parisian-themed, black-tie Ball at Woodham Golf Club on March 25th.

During the evening, President Nora also presented Keith with a cheque for £1000 – money raised at the club’s very successful annual model railway exhibition.

Guests were welcomed to the event at Woodham Golf Club, the club’s regular meeting venue, by Sergeant-at-Arms David Scott.