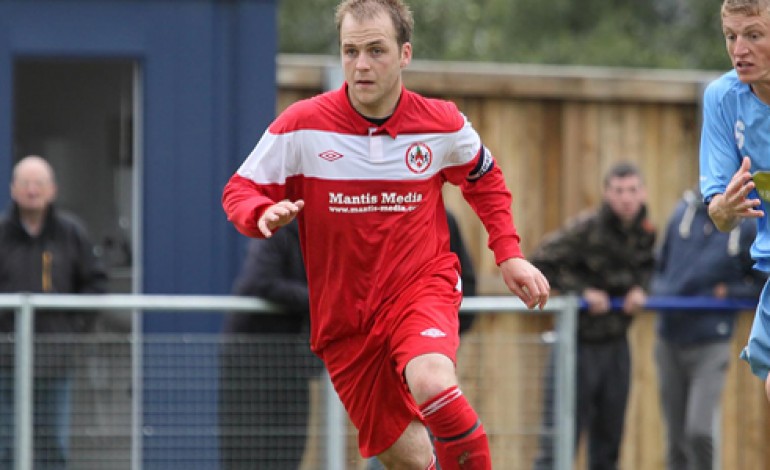 Newton Aycliffe moved to within three points of the top of the Northern League first division, after a 5-0 thrashing of Billingham Town.

With West Auckland, Whitley Bay and Dunston all busy with FA Vase commitments, the Newtonians took full advantage to move up to fifth, while extending their unbeaten run to seven matches.

Skipper Sean Tarling (pictured) made his 100th appearance for the club – the second player to have reached this landmark, after Paul Broom managed the feat in November – but it was fellow midfielders Josh Knox and Stuart Owen who stole the plaudits, both netting a brace as Aycliffe ran riot.

It took just 98 seconds for Allan Oliver’s men to take the lead against struggling Billingham Town, with 20-year-old striker Ben Wood heading in the opening goal.

A first-half double from fellow youngster Knox left the hosts reeling, before Owen grabbed his third goal of the season just before the interval. Owen netted again – doubling his tally for the season in the space of one afternoon – to complete the rout in the second-half.

Town lined up with a potent front-four, the experienced Mick Dunwell and David Onions flanked by former Aycliffe striker Jamie Owens and Nicky Martin. Oliver opted to remain unchanged from last week’s 4-5-1 formation and personnel, and it paid dividends in just the second minute as his side went ahead in fine fashion.

Wood, the lone striker once more, held the ball up on the edge of the area before feeding it wide to Owen on the left wing. The 24-year-old winger crossed superbly to Wood who had made his way unmarked to the centre of the goal, and the former Sunderland man picked out the bottom corner with a fine header from eight yards.

Owens headed over for the hosts four minutes later while at the other end Nathan Wilson flashed a 25 yard left-footed drive just wide of James Briggs’ left-hand upright as Aycliffe looked to double their lead.

In the 20th minute Oliver’s side stretched their legs and their lead as Chase McMullen kept the ball in play on the byline before crossing to Knox who poked home ahead of Briggs from inside the six yard area.

Aycliffe should’ve had three on the half hour mark when skipper Sean Tarling – making his 100th appearance for the club since its Northern League inception – stung the palms of Briggs from 25 yards.

As the ball spilled out, Owen had two bites at the rebound which the ‘keeper did a lot better to smother than he had at the initial drive.

Four minutes later though and with McMullen’s 30-yard drive deceiving Briggs in the sun, Knox was on hand to mop up the scraps and tuck home his second of the game as Aycliffe seized control.

Wood struck the inside of the upright on 38 minutes while Josh Gray found Briggs equal to his right-foot effort a minute later following some fine link-up play between both Owen and Wood.

Two minutes before the interval the game ended as a contest when Oliver’s men grabbed a killer fourth goal. Wood superbly beat two men as he danced his way to the byline and in squaring the ball he found Owen who had the simple task of side-footing home his third goal of the campaign.

If Aycliffe were expecting a reaction from Town in the second period they certainly didn’t get one. Dunwell’s most notable contribution was in knocking Darren Craddock’s tooth out with an apparent elbow while Onions, so often a thorn in Aycliffe’s side in the past struggled to make any impact on the game whatsoever.

In fact it was the Newtonians who continued the scoring when in the 66th minute they netted a fifth and most emphatic goal. Briggs stopped well from McMullen but James Oliver found Owen with the return ball into the box and the winger cleverly side-footed into the top corner from 12 yards to grab his second of the afternoon.

The visitors saw the game out from there with ‘keeper Scott Pocklington barely called upon all day while the midfield three of Tarling, Knox and Wilson won’t enjoy another game with so much space in the middle of the park should they each go on to play 300 games for the club.