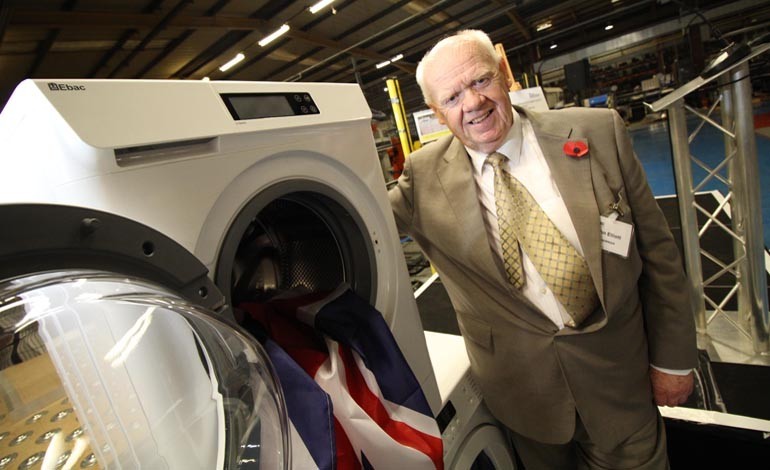 The visionary behind Ebac’s ambitious plans to bring washing machine manufacturing back to the UK insists their product will sell – despite initial problems trying to convince retailers.

Full production of Ebac’s range of washing machines will come later than originally planned, with the first machines expected to roll off the production line early next year.

But the delays have been down to the Aycliffe manufacturer’s rigorous testing procedures – making sure the washers will stand the test of their lengthy, five-year guarantees.

Ebac is proven in the field of dehumidifiers and water coolers, and has already started producing its Norfrost chest freezers for Argos and Amazon.

The firm’s chairman John Elliott – who has recently returned to the fold after stepping away from the business – is confident their washing machines will soon follow the same successful path.

But he admits it won’t be easy.

“We’ve still got to get this washing machine in the market place,” Mr Elliott told Aycliffe Today.

“We’re not getting a lot of co-operation from the big retailers, because they’re the no-risk brigade and we’re the new kid on the block. We’ve got to accept that.

“But we’ve got no doubt at all that it’s reliable. We’ve tested this probably more than other companies do, that’s why it’s taken so long.

“We’ve got to spend a year getting it out there. Then we want the big boys to come and talk to us, because our product is going to sell.”

Mr Elliott added: “For this size of business, this was an ambitious project.

“It’s finally come to fruition and there’s been a lot of hard work by a lot of people.

“It means a lot to me, but it’s not about me. It’s about the other people who put the hard work in here day in, day out.”

Ebac’s new line has been developed with support from a £1m Regional Growth Fund (RGF) grant from the Department for Business, Innovation & Skills and a £6m injection from the company’s own funds.

Ebac aims to secure and double its 200-strong workforce as it expands its product range, having previously rescued the Norfrost domestic chest freezer brand from administration and restored the UK-based manufacture of that product group.

Ebac has a 10-year strategy to become a recognised home appliance brand in the white goods sector.