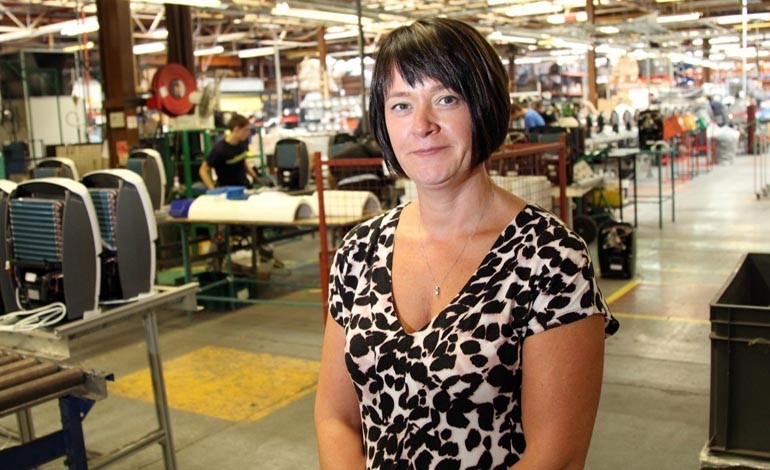 The boss of one of the region’s leading manufacturing companies says there is a “real sense of growth” in the area.

Pamela Petty, the managing director of Newton Aycliffe firm Ebac, which is bringing washing machine manufacturing back to the UK, says there’s a positive vibe around Aycliffe Business Park following a number of exciting developments recently.

Now Mrs Petty wants to see Aycliffe businesses shout about their successes at this year’s Make Your Mark event – a glamorous black-tie awards ceremony in November.

“A lot of positive developments are happening in Newton Aycliffe,” said Mrs Petty.

“I’m not sure if that’s representative of what’s happening in the UK, or if there’s something really special going on in Aycliffe, but the park does seem to be flourishing.

“There’s a positive vibe and that seems to be breeding success. Businesses are coming in and there’s a real sense of growth.

“But we need to take care of the smaller businesses. That’s really important to me.

“We’re a middle-sized business and we’re big and ugly enough to look after ourselves, almost wherever we’re based. But I think it’s important that we nurture some of the smaller businesses and help them in whatever way we can, because potentially they’re the big employers of tomorrow and they need to be able to grow and take on more people.”

Mrs Petty is vice-chair of the Aycliffe Business Park Community Steering Group, which is organising its second annual business awards event, Make Your Mark, at the Xcel Centre on Thursday November 26.

Ebac has won a number of awards in recent years, and Mrs Petty is urging businesses to get involved by nominating themselves and others for the 11 gongs which are up for grabs.

“What I like best about awards is that you can come back into the factory, and tell all the staff here that there’s recognition for all the hard work that we do,” she added.

“It’s nice for your customers, suppliers and bankers to see an independent voice saying how well you’re doing, rather than us telling them.

“It’s also nice to take a step back sometimes. We’re all faced with challenges every day. You focus a lot on your everyday business, so it’s good to just to take that step back once a year and give yourself a pat on the back.

“For us at Ebac, I’m really looking forward to next year, or the year after, when we will really be able to start shouting about our washing machines.

“Although we’ve already been recognised for a lot of the things that we do – we employ a lot of people and export a lot of goods – the washing machines have so far been all talk, it will be nice to get some recognition for actually selling washing machines in the near future.”

And even though Ebac won the Manufacturer of the Year award in 2014, Mrs Petty added: “It was a very strong shortlist for the top award, and that’s because there are some brilliant companies on Aycliffe Business Park.

“The strength of the categories surprised us a little, with it being the first time we did the awards, so we’re looking forward to what this year’s event will throw up!”

The categories at this year’s Make Your Mark awards are Apprentice of the Year, Apprenticeships, Company of the Year, Employer of the Year, Engineering & Manufacturing, Export, Heart of the Community, Innovation, Best Newcomer, Service Business of the Year and Best Small Business.

Businesses can enter online at www.aycliffeawards.co.uk

• Tickets for the evening itself, priced from £29.95, as well as sponsorship packages are also available from www.aycliffeawards.co.uk or by emailing [email protected]

Make Your Mark 2015
The Categories in full

APPRENTICE OF THE YEAR
This award is looking for nominations for apprentices from their employers on Aycliffe Business Park, to celebrate and reward people working, currently engaged in, or having completed, an Apprenticeship. Applications should explore how becoming an apprentice has benefited both the apprentice and the business.

APPRENTICESHIPS
For an organisation that has implemented an apprentice scheme as an integral part of developing their workforce.

COMPANY OF THE YEAR
This award will go a company on Aycliffe Business Park who has performed outstandingly this year.

EMPLOYER OF THE YEAR
Celebrating organisations on Aycliffe Business Park seeing the best return on an investment in people, this award recognises the employee strategy that best attracts, retains and develops talent – and how it contributes to sustainable growth and being an employer of choice.

ENGINEERING & MANUFACTURING AWARD
To recognise and highlight a company that has demonstrated engineering and manufacturing excellence.

EXPORT AWARD
To encourage and recognise a company that has generated substantial and sustained increases in export activity.

HEART OF THE COMMUNITY
This award celebrates excellence in corporate, social and ethical activity, and seeks to identify those organisations which best exemplify the social and community spirit which is at the core of Aycliffe Business Park culture.

INNOVATION AWARD
To identify and reward the company which has launched the most innovative new product / service on Aycliffe Business Park in the calendar year 2014.

NEWCOMER OF THE YEAR
This award is open to companies on Aycliffe Business Park that have been in operation for a maximum of two years as of June 30th, 2015.

SERVICE BUSINESS OF THE YEAR AWARD
To reward and recognise professional service organisations that have shown demonstrable strength in their respective field and a contribution to the local economy with the services they provide.

SMALL BUSINESS AWARD
This award is open to companies on Aycliffe Business Park that normally employ no more than 75 full-time staff and which have a proven record of success.