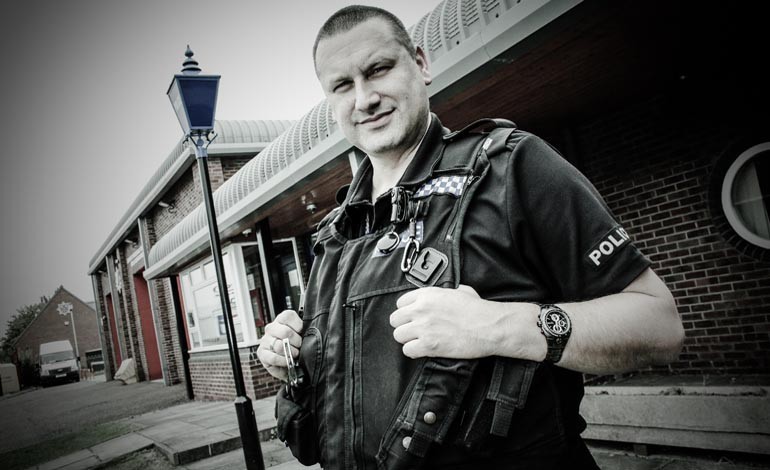 Time for a bit of blue again, Aycliffe Blue that is!

So here we are sailing deeper into 2016 and as I type this piece it’s Easter weekend. No chocolate surprises in sight for me though unfortunately.

I’ll start off with a bit of news regarding the NPT itself. This week we will be welcoming a new PCSO to our ranks – Daniela Jones will be joining us fresh from training and will be adopting Woodham and Shafto St. Mary’s as her own working closely with old hat Gavin Laycock.

Having met Daniela recently I can report that she is very enthusiastic and looking forward to immersing herself with local issues. I am sure you will get to meet her over the coming weeks.

I myself will be handing over the Inspector’s pips during the coming months as we have a new ‘boss’ taking over – I won’t provide any details as to whom at this time as I would hate to steal her thunder and any introductions she may wish to make (for the more observant amongst you there’s a clue there). All I will say is, great choice!

There is no doubt that anyone following the Team’s social media pages or having read local media will have seen that – of late, we have seen a troubling rise in the occurrence of house burglary.

We have not suffered any such crimes this past week within Newton Aycliffe, however the Neighbourhood Teams here and at Shildon have been working closely together putting various pieces of intelligence together and progressing various leads under the watchful eye of our CID and that work has paid off.

I reported several weeks ago that a 14-year-old male had been arrested on suspicion of being involved in these crimes and bailed.

That tenacity didn’t end there… on 19th March a 39-year-old local male was arrested on suspicion of involvement in the burglaries – he was bailed whilst further enquiries progress regarding his suspected involvement.

And as I type this, a 42-year-old male, also from Newton Aycliffe, was arrested recently and has now been charged with a number of burglaries across Aycliffe and Shildon, and has been kept in police custody to go before the courts.

THOUGHT OF THE WEEK

I would like to add that the taking of someone’s liberty – aka arresting them – is not in itself evidence of guilt.

Police Officers operate in the arena of suspicion and belief. During any investigation suspicion gives us the grounds to make an arrest – subject to necessity, and subsequently interview detained persons.

It may be that the outcome of the interview process eliminates a particular person from the investigation and they are released with no further action being taken.

Whilst there is no doubt that, to many people, the removal of their liberty is a harrowing experience, it is sadly a necessary evil.

Why do I refer to this you may ask?

As part of our continued efforts to engage with the community and highlight our accountability to yourselves (basically, what we’re doing in relation to key crimes/issues) we regularly raise awareness of arrests made and such conversations often generate debate and conversation amongst our followers.

So what am I saying? If you read a post relating to an arrest that has been made, that in itself is not evidence of someone’s guilt – it is an awareness that we are working to address local issues by pursuing all lines of enquiry.

And that’s it for this week. Until next time, stay safe, have fun, and be good.