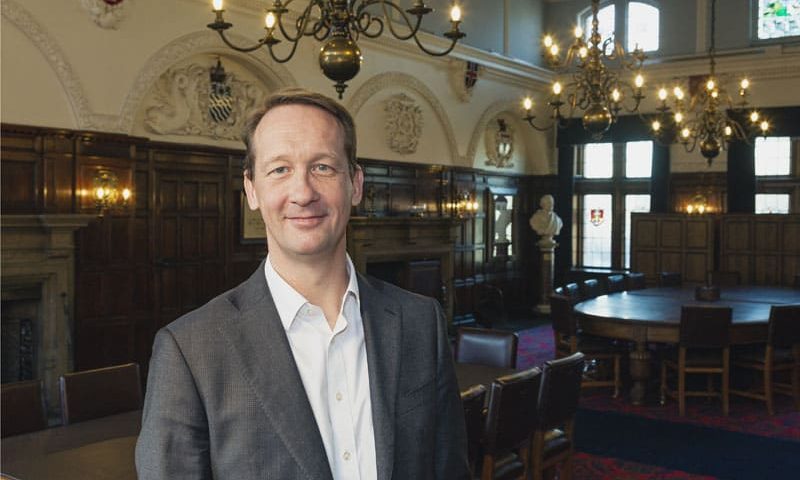 Teesport is a gateway to the world for many Aycliffe manufacturers. The port is run by PD Ports – and its CEO, Frans Calje, reflects on the lessons of the past as he plots a prosperous long-term future for the business, in an exclusive interview with Peter Barron…

Before he begins discussing the future, Frans Calje is keen to look back to the past.

The chief executive of PD Ports is standing in the grand old boardroom of the company’s Queen’s Square headquarters in the heart of Middlesbrough. With its mahogany panels and spidery brass chandeliers, it hasn’t changed in a generation.

“Those guys were heroes – visionaries,” says Frans, pointing to a framed black and white photograph on the wall.

The smiling men in suits make up the board of directors of the Tees Conservancy Commissioners – the forerunners of the Tees and Hartlepool Port Authority – who took a momentous decision in 1956 to begin work on creating the largest inset dock in Europe.

They ordered Tees Dock to be made to dimensions far in excess of the depth and width required for any ship built at the time.

“The project was massively over-specced, but they saw that ships were going to get bigger. It was a colossal gamble, but they had the courage to go ahead,” says Frans.

“It enabled the River Tees to become one of the largest ports in Europe, and that decision will still be having an impact on the area’s economic fortunes 100 years after it was taken.”

The boardroom history lesson remains valid today because Frans is leading a business that still passionately believes in the importance of making decisions that will stand the test of time.

PD Ports is a business with a long-term view of doing what’s best for an area whose fortunes are intrinsically linked to the river that flows through it.

“The coronavirus pandemic is having far-reaching consequences, but it is a short-term shock to the system,” he says. “However, the infrastructure decisions we make now require a business case for the next 20 to 25 years.”

It is 13 years since Frans, who hails from the shipyard town of Schiedam, in Holland, was lured to Teesside by the opportunity to redevelop Teesport’s deep sea container terminal.

After two years as projects director, he became managing director for the container business, then group CEO in 2017.

One day, his photograph will go up on the boardroom wall, alongside his predecessors, but he is far more concerned with framing a prosperous future for the business and, therefore, Teesside.

PD Ports is the Tees Valley’s largest private sector employer and, together with its customers, Teesport contributes £1.4 billion to the economy annually, accounting for around 10 per cent of GVA in the Tees Valley, and supporting 22,000 jobs.

Teesport also acts as a gateway to the world for many of Aycliffe Business Park’s large manufacturers – the likes of Gestamp, Hitachi, 3M, Husqvarna, Roman and Ebac, to name just a few.

In August, the £9.2m Teesport Bulks Terminal was unveiled in a move described as an important milestone in the revival of the Tees Valley. In October, a £3.36m investment in improving Ro-Ro facilities strengthened the port’s position as the UK’s northern gateway for international trade.

December saw 238,000 tonnes handled at Teesport Bulks Terminal, the largest amount since August 2015, and the company announced it had signed option agreements with Wentworth Clean Power worth more than £660m, with up to 650 jobs being created during construction and once operational.

Being able to welcome Adelheid-S – the largest ever container vessel at Teesport – was another memorable moment, but the biggest highlight for Frans was the way PD Ports’ employees rose to every challenge.

When the pandemic took a grip, the company’s Business Continuity Management Committee was invoked, chaired by head of police and security, Neal Armstrong, and it speaks volumes about the people-first culture of the business that Frans was told, unceremoniously, that his involvement was not required.

“We believe in empowering people to take responsibility, and that’s what they did,” he smiles.

The committee’s message was that the most valuable role the CEO could play was to allay the anxieties that had inevitably surfaced among the workforce.

“People were naturally worried about losing their jobs, their loved ones, and their own lives,” Frans explains. “My job was to reassure them that their jobs were safe, and by talking about the strength of the businesses, I could at least take that worry away.”

Meanwhile, there was a renewed focus on mental health, with a dedicated awareness week to challenge the stigma, and encourage employees to open up if they were suffering.

No staff were furloughed, and reassurances were given that anyone affected by Covid would remain on full pay, irrespective of whether they were able to come into work.

“Maybe there was some initial scepticism about whether people would take advantage, but that never happened,” says Frans.

“It was a case of ‘This is a business that looks after me, so I’m going to do everything I can to look after the business.’ It created a buzz and solidified the sense of belonging.”

The staff embraced being on the frontline, proudly aware that they were making an economic difference, not just locally, but regionally and nationally.

The overall response to the pandemic led to the British Chamber of Commerce awarding PD Ports the “UK Business Hero” stamp, and staff were given a bonus at the end of the year as a thank you for their extraordinary efforts.

“If I’ve learned anything, it’s the value of surrounding yourself with people who are better than you are – that way, you make the right decisions, and get the right results,” says Frans.

Being part of the wider community is also central to the PD Ports ethos. In April, £9,000 was donated to local good causes, including iPad donations to NHS trusts, and £3,000 to foodbanks.

At Christmas, a further £40,000 was donated to local and national charities, including the British Heart Foundation; the My Sisters Place domestic violence service, in Middlesbrough; foodbanks, and hospices.

It also included a £5,000 donation to the Middlesbrough and Teesside Philanthropic Foundation to kick-start the ‘Tech for Kids’ fund, aimed at tackling digital poverty.

Looking to the future, PD Ports not only created 95 jobs in 2020, but launched an industry-leading programme to recruit 50 apprentices by the end of the first quarter of 2021.

The engineering apprenticeship intake has doubled over the past year, and the business remains committed to attracting, developing and retaining talent through partnerships with the High Tide Foundation, Tees Valley Logistics Academy, Teesside University, and the North East School of Shipping.

More than 20 per cent of its workforce is aged under 30, and it was a source of pride that PD Ports was the best represented company on the shortlist of the Multimodal 30under30 initiative that seeks to find 30 young “superstars” of the freight, transport, and logistics industry.

There are plans to host a young people summit early this year, to give the next generation the chance to engage directly with the business and discuss career opportunities.

Any of those who join PD Ports know they are part of a business determined to have a long-term impact.

For example, work will soon begin on the development of the Northern Gateway Container Terminal – a further investment planned to accommodate rising demand for container traffic, the project will enable Teesport to handle new deep-sea liner service and larger container ships whilst increasing capacity 1.5 million.

The company aims to be carbon neutral by 2027, and plans were recently unveiled to work with key partners and stakeholders to make the River Tees the UK’s most successful port region by 2050.

“We need to bring in new talent, and allow them to fail, as well as allowing them to flourish,” he says.

Respect for the past, care for the present, and a bold vision for a long way into the future.

The visionaries of the 1950s look down, in black and white, from the boardroom wall.

Their spirit lives on.