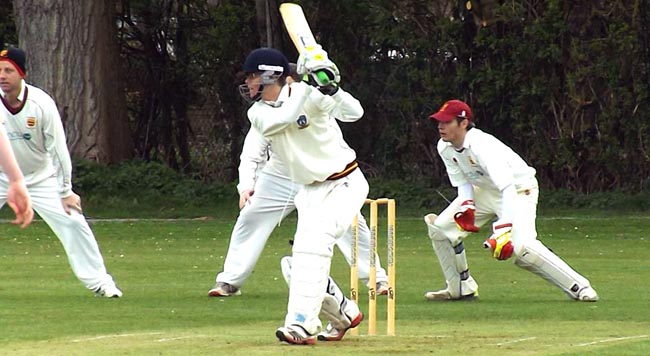 The 19-year-old opening batsman (pictured in action above) scored 115, including 14 boundaries, in his second Century for the club to cap off a man-of-the-match display.

Aycliffe racked up 265 for seven from 50 overs, with Matty Atkinson scoring an impressive 63 and Luke Telford 31.

“It was a superb advert for NYSD cricket, with over 500 runs scored in the match,” said Aycliffe Secretary Lee Weldon.

Wolviston were 117 all out after 37 overs, with man-of-the-match Danny Weldon taking a season’s best four for 27 and Adam Gittins three for 12.

‘The Bat’ Travis, meanwhile, demonstrated his all-round ability by taking three wickets for 26 runs, and duly celebrated with a post-match kebab.

Our second team go to Northallerton this Saturday to take on their second XI, also 1pm.