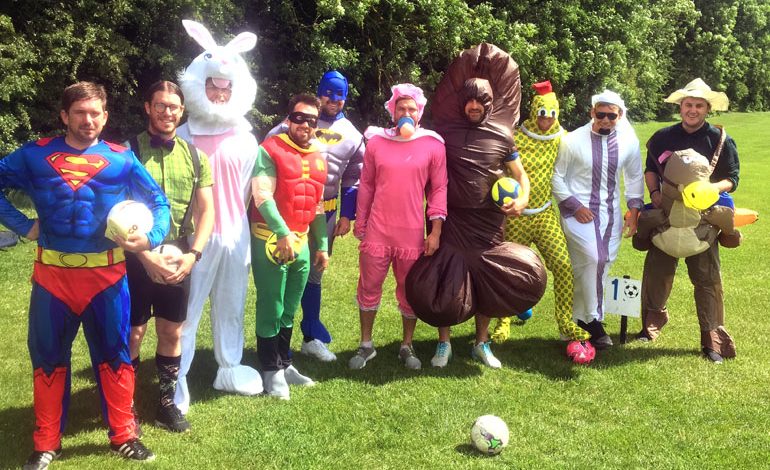 A Sunday morning football team united last week to aid the fundraising push of fellow Newtonian Paul McGeary, as they raised £650 for the leukaemia and lymphoma charity, Bloodwise.

Newton Aycliffe Huntsman FC (formerly Locomotion FC) held a successful fancy dress footgolf tournament, followed by a raffle and prize-giving day as they returned to pre-season training following their fantastic 2016-17 campaign, which saw them finish third in the league and county cup runners-up.

Club chairman Will Swinburne – a former school friend of McGeary – handed over a cheque which saw McGeary’s campaign, dubbed #NotOneInch, total £27,597.23 since its launch back in 2014, when McGeary was struck by APL for the first time.

Following a relapse in 2016, McGeary, 35, has once more fought off the disease, and just last week was told his condition was in complete remission once more, following a gruelling 11-month programme of chemotherapy.

“On the back of my good news, it was great to see the lads come together and help us go through the £27k barrier,” said McGeary.

“Will text me a few weeks ago saying the football club wished to help us reach the milestone, and credit to them they cracked on, had a laugh and raised the money effortlessly.

“It’s testament to the lads, many of whom I’ve known for years, but some I’ve never met, that they united for the cause and put the charity at the front of their thoughts as they returned to training.”

Huntsman FC compete in the top tier of the Durham & District League, and last season reached the final of the County Cup and the latter stages of the prestigious All-England Sunday FA Cup.

Anyone wishing to support the team – who play their home games at Simpasture Park – in any way, is urged to contact Swinburne via the club’s Twitter or Facebook page in the first instance.