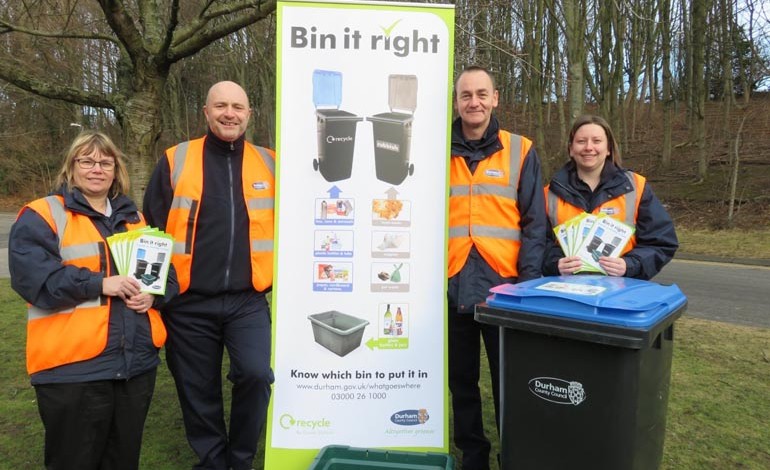 A campaign to encourage County Durham residents to recycle their household waste has been extended following its success.

Durham County Council launched the Bin it Right campaign in April 2014 to help inform people about what they can and can’t recycle and which bin they should use.

The campaign has significantly improved the quality of the material collected from the kerbside for recycling and enabled the council to recycle, reuse or compost 43 per cent of all household waste collected in County Durham, which is in line with the national average.

And by reducing contamination levels – which can be caused by people placing non-recyclable materials, such as food, nappies and pet waste, in their recycling bin or by not washing containers out properly – the council is saving money due to not having to pay around £100 per tonne for alternative treatment and disposal.

Following its success, the campaign will now be extended until the end of March 2016

Cllr Brian Stephens, Cabinet member for neighbourhoods and local partnerships, at Durham County Council, said: “We’ve had a very positive response from people to our Bin it Right campaign and I’d like to thank residents for their continuing efforts to ensure we recycle as much as we can.

“It is essential that all items are put in the right bin or box so good quality recyclable materials are free from contamination and can be turned into new products.

“This is not only beneficial for the environment but is also helping us to save money.”

As part of the Bin it Right campaign more than 50 community events and talks have been held and more than 16,000 residents have taken time to talk to the council’s recycling team about what items they can recycle and which bin they should use.

Residents are asked to wash and squash items where possible and place them loose in the recycling bin without being bagged.

Items which can’t be recycled, such as food, pet waste and nappies, should be bagged and placed in the rubbish bin.

People can get further information on recycling at www.durham.gov.uk/whatgoeswhere or by calling Durham County Council on 03000 261 000.