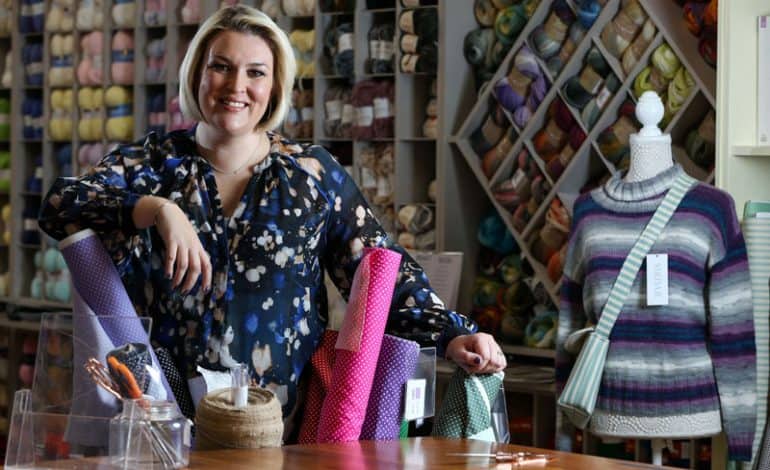 Founder of £44m global brand, and youngest-ever TV Dragon, tells Aycliffe Today editor Martin Walker that you can be astute in business and be nice to people at the same time…

Despite her astronomical rise to fame, Sara Davies’ feet remain firmly on the ground in her native County Durham.

Her emergence on BBC Two’s hit show Dragons’ Den – along with several other TV appearances on This Morning, Loose Women and countless national paper and magazine interviews – have propelled her to household name status.

But the 35-year-old from Coundon, who relocated her £44m-a-year global business Crafter’s Companion to Aycliffe Business Park almost four years ago, remains fiercely proud of where she calls home.

Sara has already made a big impact on the business show, which is presented by Evan Davis and aired on Sunday evenings.

After replacing Jenny Campbell, Sara is the highest-spending Dragon in its 17th series, having invested more than £500,000.

She’s already busy giving vital mentoring and commercial support to those start-up firms – something which excites Sara greatly, and keeps her even busier.

“I absolutely loved every minute of it!” smiles Sara, as we chat in her offices within Crafter’s Companion’s site along Horndale Avenue on the business park.

“Filming was intense. It’s done in a short space of time, so the filming days are long, we usually see about eight pitches a day.

“But it’s fantastic fun – the other ‘dragons’ are lovely. They’ve made me feel so welcome.”

Sara admits to being slightly nervous in the early filming sessions – but she made a very early decision to just be herself.

“A friend of mine suggested I should look into it, as I’ve always been a keen Angel Investor, and he contacted the show’s producers last year,” explains Sara.

“The next day I had one of them on the phone. We chatted on Skype for about two hours and he spent a long time making me aware of the commitments involved and the impact it would have on me and my family.

“I then went for a screen test, along with other candidates, and I just thought to myself ‘be yourself’. I’ve never tried to hide my accent – I’m proud of it. That mantra has stuck with me throughout my life, so why change now?”

Production of the 17th series started in June – involving 18 filming days – and its 14 episodes are still currently being aired.

And while the other dragons – Peter Jones, Deborah Meaden, Touker Suleyman and Tej Lalvani – have been welcoming, Sara has clearly made her mark.

“I think some people thought I’d be too nice for Dragons’ Den,” she says.

“Some of the guys who walk through that lift, you can see how nervous they are, sweaty palms and stuttering their lines. I often say to them quietly ‘you’re doing great, keep it going’. But that doesn’t mean to say I’ll invest in their business.

“And the other dragons soon realised I meant business when I took them on. They all have their own qualities, but there are some businesses I was determined to get, and some I wasn’t willing to share!”

Sara has invested £504,000 of her own money in eight businesses during the series, including Tancream, Mak Tok chilli paste and Pipe Easy, a tool for DIYers.

“We’ve already spent a lot of time working with these businesses,” she says. “They’re all exciting businesses in their own right, and I love the thrill of helping to take businesses to the next level.

“It’s hard work, and it does take more time out of my diary. I still spend a lot of time in my own business and, of course, I have a young family.

“But thankfully I have fantastic support around me.”

Davies founded Crafter’s Companion, a craft supply company, whilst at university in 2005.

During a placement at a small craft company she spotted a gap in the market for a tool that could create bespoke envelopes for handmade cards and, with help from her retired engineer father, she designed a product called The Enveloper which she launched on the TV shopping channel Ideal World, selling 30,000 units within six months.

By the time she graduated the business was turning over £500,000 – and by the time she was 23, Sara had built a £2m global craft business. Now, though, having cracked the huge USA market, Crafter’s Companion turns over £44m a year.

After initially establishing the business in her hometown of Coundon – where her parents’ paint shop and sister’s decorating shop still reside – Crafter’s moved to Aycliffe in 2016, taking over the former Holiways car showroom, and later that year she was awarded an MBE for services to the economy.

Sara has recently been asked in TV appearances why she continues to live in County Durham.

“Rather than be annoyed at that question, I actually love it when people ask me that,” she insists.

“The people of the North-East know how fantastic this region is. It’s my home and it’s where I built my business.

“My commitments take me all over the UK and to the USA but our base will always be here and we’re proud of that.