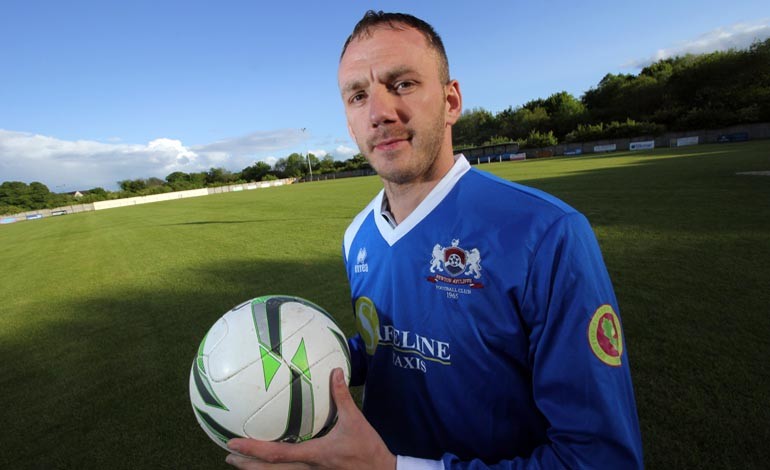 After avoiding relegation for a third successive season, Aycliffe chairman Allan Oliver persuaded manager Peter Dixon to remain in charge for the 2015-16 campaign.

Dixon set his summer stall out in May with the capture of West Auckland’s prized forward Moffatt – who fired West to two FA Vase finals in recent seasons.

And the goal machine says he wants to help Aycliffe realise its full potential.

Aycliffe have struggled at the wrong end of the Ebac Northern League first division for the last three years after winning promotion to the top flight in 2011.

But it was during their second division title-winning season when football fans were descending on Moore Lane.

The club’s record league gate of 567 came when Darlington RA visited the club on 4th March 2011.

But despite top-flight status being retained year-on-year, Aycliffe’s crowds have dipped.

Moffatt told Aycliffe Today: “I want to help the club get the fans back.

“When they won promotion they were getting crowds of 300, 400. Hopefully we can get a good crowd back together and push on as a team.

“I want to score as many goals as I can. Hopefully it will put us at the top end of the table and in with a shout – that’s got to be everyone’s aim.”

The 31-year-old forward – who has previously played for Blyth, Gateshead, Durham and Consett as well as West – says it wasn’t a difficult decision to come to Aycliffe.

“I’ve known the chairman (Allan Oliver) for a long time and Peter and Foz from my last six years at West,” he added.

“To come to Aycliffe and play for them two again, I was never going to turn it down.

“I just missed out on the league title and two FA Vase finals at Wembley with them, I feel I have some unfinished business as a player with that management team.

“Now I want to kick on with them and hopefully do well for Aycliffe.”

Moffatt also says a strong run in the FA Vase is essential after experiencing two Wembley finals with West.

“It’s everyone’s aim in this league to get to the Vase final,” he said.

“It brings a lot of publicity and money to the club, but the togetherness of the team when you do well in the big cup competitions is unbelievable.

“It will bring more fans in as well and it’s everyone’s dream to play at Wembley, so that’s something we’ve got to aim for as well.”