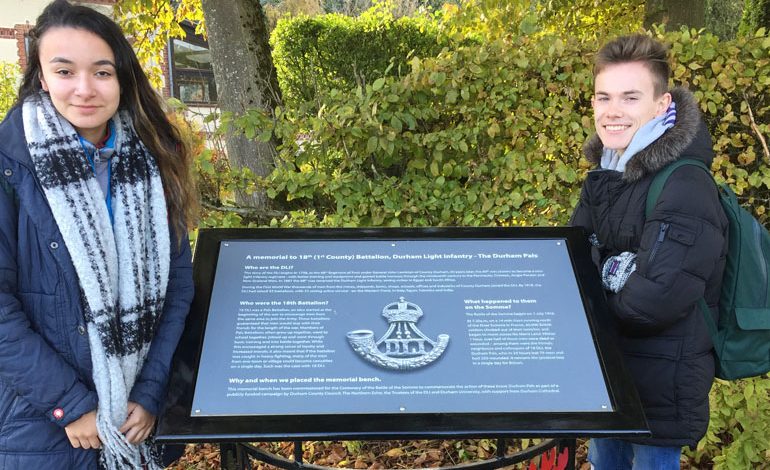 To mark the centenary anniversary of World War One, Year 11 History students, Macy Cane and Joe Richardson, were selected to represent Woodham Academy on a visit to Ypres in Belgium and Northern France with the First World War Centenary Battlefields Tours Programme.

The tour was to honour those who had fought and died in the First World War, develop knowledge and gain an historical insight into the experience of the soldiers in the war.

A crucial part of the trip was a memorial visit to Menin Gate in Ypres. The memorial site acts as a landmark of remembrance. Every night at 8:00pm a ceremony commemorates soldiers who lost their lives in the war, many of whom were unnamed. Woodham Academy students were specifically honoured by being selected to participate in the ceremony with an army officer.

They joined him placing a wreath as a sign of respect for the soldiers who had lost their lives. The ceremony was both moving and special for those who attended. It was concluded with the playing of ‘The Last Post’.

Students were also able to investigate the lives of a soldier by visiting the Flanders Field Museum in Ypres and the Memorial Museum in Passchendaele where they would see World War One artefacts, including a bayonet and preserved trenches.

They were also given the opportunity of visiting the Somme Battlefield area – Newfoundland Memorial Park the largest battalion memorial on the Western Front and the Thiepval memorial site.

To consolidate their experience, the students were also able to view a production of ‘The Journey’s End’ gaining an empathetic perspective of trench warfare as they witnessed the soldiers’ struggle both mentally and physically.

Joe said: “This was an emotionally demanding, yet gratifying experience. It shall follow me throughout the rest of my life.”

Prior to their visit, students researched local soldiers of the Durham Light Infantry (DLI) who had died in the war.

They located their graves at Tyne Cot Cemetery, the largest British and Commonwealth War Cemetery in the world. However, the numbers are still being added to.

The students witnessed the burial of one British and two Australian soldiers. Students were allowed to pay respects to all soldiers who participated in the war especially the serene Lijssenhoek Military Cemetery in Belgium to solemn Langemark German Cemetery giving a true perspective of war.

This trip was the pinnacle of many other aspects that the Woodham History Department are doing to mark such an important, historical occasion.

All students have been using some of their tutor time to focus on remembrance; Key Stage Three students have also completed moving letters thanking the unknown ‘Tommy’.

Macy added: “This was an experience I won’t forget. I was deeply moved by visiting the burial grounds of thousands and thousands of men who had fallen in protecting their countries.

“They will always live on, and I thank them, for allowing me the freedom I have to this day.”