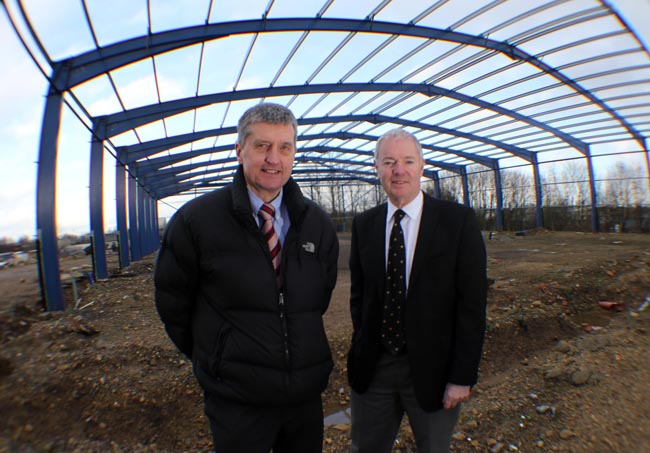 A Newton Aycliffe distribution firm is investing £700,000 in a new multi-use building on its huge site as part of the group’s long-term growth plans to create employment.

Stiller Warehousing and Distribution has plans to develop a two-and-a-half acre piece of land which adjoins its main premises on Ridgeway, Aycliffe Business Park.

The first phase of the development includes a 20,000 sq ft multi-use building, with the steel frame already in place, while there are also plans to develop the rest of the land.

Contractors will now begin building and fitting out the facility, which will be fully insulated for multi use purposes.

Stiller, which employs 115 people, say the property would be ideally suited for a small to medium-sized manufacturing or distribution company.

The firm’s managing director Paul Stiller said: “At this stage, as we’re about to construct it, the facility could be built bespoke for end-users, which is very exciting.

“It will be a brand new, 20,000 sq ft building right in the heart of Aycliffe Busines Park. The building will also divide into (for example) two 10,000 square feet units”.

“We’re a very flexible warehousing and property company, and that’s one of our biggest strengths.

“There is also planning permission for other buildings on the site which we’ve ear-marked for further phases of the development.

“These property developments are part of our long-term growth strategy which is aimed to create new employment in the area.”

Stiller, which reported an increase in turnover to £10.5m at the end of 2013, is working with an increasing number of companies on Aycliffe Business Park.

The group offers a “just in time” service to the likes of Gestamp Tallent and 3M – storing materials and feeding them into their factories as and when they need them – and has recently started working with growing engineering firm Palram.

Meanwhile, the rapid success of national network Palletline – a national group of 70 companies across Britain of which Stiller is a member and major shareholder – is increasing business, resulting in two new members of staff being recruited.

Stiller’s premises at the heart of Aycliffe Business Park includes a 15,000-pallet store within 160,000 square feet, which stores for 15 customers from varying industries.

“We continue to do a lot of work with Gestamp Tallent and 3M, two firms that are expanding and our business with them is expanding correspondingly,” added Mr Stiller.

“Palletline is a very successful national network which is experiencing growth. The system itself, of which we’re an integral part, is growing at more than 20 per cent a year.

“The numbers of pallets being transported around the country are going up all the time.

“In order for us to remain efficient, we have to match the collections we make in this area with those that we distribute in the area on behalf of our Palletline partners.

“Because the number of pallets is going up by 20 per cent a year, we’re then having to gear up to deliver 20 per cent more in this area.

“As we gear up to that – to trunk them up from the Palletline hub in the Midlands and back to the North-East – we’ve got to generate more business in this area in order to keep our vehicles efficient.

“Otherwise we’ll be going down empty to the hubs to bring back lots of pallets, which isn’t cost-effective.

“We’re already very active in the sales market place but we’re investing in our sales team accordingly, with two new members of staff coming in, to build on the success of Palletline.

“It’s the market-leader in the transport of pallets and we recently invested more than £1m in a fleet of new vehicles, including four which were part of the Government’s trial of longer semi-trailers (LSTs), which nationally are expected to save over 3,000 tonnes of CO2 over 10 years.”